Beech forest and its 'fifty shades of grey'

In a recent issue of NZJB, researchers assess similarities between black beech and mountain beech trees. Two gene pools were recognised as co-existing at a regional level, but despite hybridising, the two species remain genetically distinct.

One of New Zealand's most celebrated poets, James K. Baxter spoke in depth about the beauty of New Zealand beech in his 1949 'Poem in the Matukituki Valley' of the "feathered moss and filigree of bracken" of the forest, which still offers its tranquil ambiance for those travelling through bush walks in modern day Aotearoa.

Areas such as the foothills and valleys of Kā tiritiri o te Moana (Southern Alps) are covered in thick blankets of beech forests, spanning from the lowlands all the way to the top of the tree line in the mountains. Beech forest dominates more than two thirds of the remaining indigenous forest of Aotearoa and covers more than 2.9 million hectares.

Within these beech forests spread across New Zealand, there are five indigenous species (all endemic). Four of these five species belong to the genus Fuscospora, and the remaining species to Lophozonia. Two of the fuscospora species, black beech and mountain beech, have presented a problem for botanists over the years. Together, they are easily distinguished from the other species by their small, entire leaves; a characteristic not found in the other species of beech in New Zealand.

Due to overlapping range and often similar in appearance, mountain and black beech were often treated as varieties of the same species by botanists over the years. In Te Reo Māori, they are both known as tawhairauriki (small-leaved).

Black beech inhabits lowland areas, whereas mountain beech—true to its name—prefers to grow high on the mountains. Both trees are capable of growing up to 30 metres tall, though mountain beech is generally smaller in stature and wanes at higher altitudes to form ‘goblin forests’, where the trees are no more than 2 metres tall.

While individual trees are often very distinct due to their growth habits and preferred altitudes, intermediate populations that possess characteristics of both species are relatively common. This occurs as black beech forest gives way to mountain beech as altitude increases, meaning the two species often come into contact.

So do these two similar-looking species of beech interbreed in these contact zones? And if so, to what extent?

In the most recent issue of New Zealand Journal of Botany, researchers assessed just how similar the two taxa are. Two corresponding gene pools were recognised for mountain beech and black beech, which co-exist at a regional scale. Mountain beech and black beech are genetically quite similar, and have split into two distinct species from their common ancestor relatively recently.

The researchers identified that there is a hybrid zone where populations of the two species of beech interbreed and may exchange genes, meaning trees in this zone can be difficult to confidently place as belonging to either species. However, this zone appears to be narrow.

Outside of these areas these two species of beech remain genetically distinct from each other, despite the ‘fifty shades of grey’ that they may display in certain intermediate areas as a result of past and ongoing gene flow at a local level.

The Journal article ‘Fifty shades of grey: black beech and mountain beech are genetically distinct but locally admixed’ is by Rob Smissen, Sarah Richardson and Peter Hennan and is available to read in full at Taylor & Francis Online in the latest issue of the New Zealand Journal of Botany. 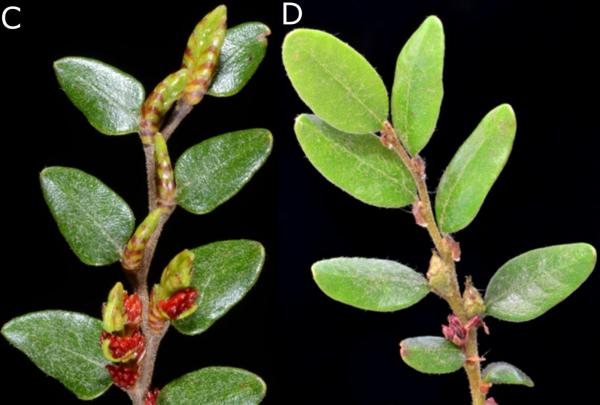