Building a pest free Aotearoa together

In an article in the latest issue of the Journal of Royal Society of New Zealand, researchers explore the potential for gene drive technologies to help us reach the goal of becoming pest free by 2050.

Building a pest-free future for Aotearoa is a high priority for many New Zealanders, with 84% of people surveyed in the Biological Heritage National Science Challenge project agreeing that pests represent a serious problem for New Zealand's conservation efforts to save our taonga species from the threat of introduced predators. Just 14% of the more than 8,000 people interviewed believe that there is currently a sufficient amount of pest control being done.

In the article 'The potential for the use of gene drives for pest control in New Zealand: a perspective' in the latest issue of the Journal of the Royal Society of New Zealand Vol 48.4, ten prominent researchers from across a variety of fields (including genetics, bioprotection and Māori studies) discuss Aotearoa's potential for developing gene-technologies that could be applied to manage pests, especially for social (vespine) wasp and brushtail possum control.

Currently, New Zealand spends tens of millions of dollars every year on pest control, mostly through the use of trapping and poisons like 1080 and Vespex. Inventors and scientists want to develop new technologies to add to our pest control toolkit in the next few years, but new discoveries need to be supported by the public as well as being safe and effective.

The use of the metabolic poison 1080 is a widespread and currently crucial pest control tool in New Zealand. 1080 can be dropped from the air which is a huge benefit for controlling for pests in the rugged, thickly-forested and highly-remote terrain that makes up a large portion of Aotearoa. When a pest boom occurs, 1080 is currently the only method that can be rapidly deployed into these remote areas. Without 1080 many native species would certainly face a grim future, but its use is also opposed by some groups.

Vespex is currently the most effective control of vespine wasps available, though it also has limitations when considering the enormous population densities and areas that the invasive wasp inhabits. Aotearoa has the world's highest density of vespine wasps, and their biomass in our honeydew beech forests outstrips that of birds, rodents and stoats combined.

In order for New Zealand to succeed in the recently set goal of becoming pest free by 2050, the deployment of new, cutting-edge pest control methods will be a key factor.

New Zealand has an advantage over other locations in utilising these new methods. This is because it is an island nation with well-established and transparent regulatory frameworks, a strong biological research sector and a geography suited to the containment of new technologies. Genetic modification is tightly regulated by central and local government with key documents being the New Organisms and Other Matters Bill (2003) and the Hazardous Substances and New Organisms Act (1996).

So what is a gene-drive and how does it work?

In a gene-drive system, edited genes copy themselves into all gametes (reproductive/sex cells), thereby ‘driving’ themselves through populations of organisms over many generations. This means it would be possible to develop gene-drive systems to spread a naturally occurring, or introduced, gene for sterility through a population which will prevent pests from producing offspring. 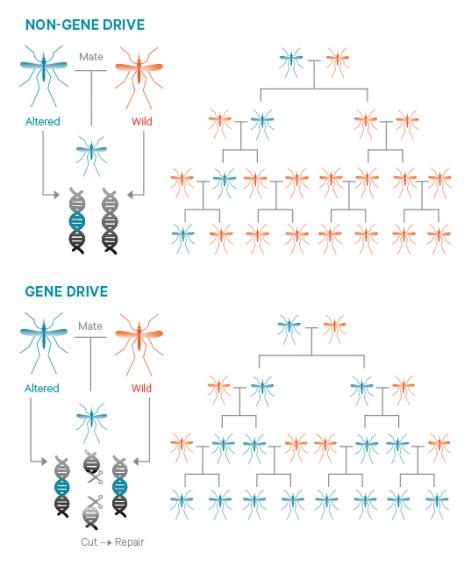 Diagram that shows how gene drive can rapidly spread an altered gene through a population. (View evidence update that explains advances in gene technology.)

So what are the next steps?

The researchers have identified a a number of areas where we need to know more before gene drives could be used in New Zealand. They recommend:

If you would like to read the full article 'The potential for the use of gene drives for pest control in New Zealand: a perspective' it is available for access now on Taylor & Francis Online in the latest issue of the Journal of the Royal Society of New Zealand Vol 48.4.

The authors of the NZJRS journal article are:

This article serves as an underpinning reference for the discussion document and technical paper on the use of gene editing for pest control in New Zealand, produced by the Royal Society Te Apārangi expert panel  considering the potential uses and implications for using gene editing in Aotearoa.