In his review article 'Spontaneous interaction of lactoferrin with casein micelles or individual caseins' published in Ngā Kete: The 2018 Annual Collection of Reviews; Dr Skelte Anema, from the Fonterra Research and Development Centre, summarises research carried out by his group on spontaneous interactions between the large milk-derived basic protein lactoferrin with casein micelles in milk, and with individual isolated casein proteins.

The spontaneous self-assembly of biological macromolecules is of great interest scientifically and holds the potential to offer unique functionalities in food and technical applications.

About 3.5% of cow milk is protein, which can be divided into two broad groups. These groups are whey proteins (which are around 20% of the total protein) and casein proteins (around 80% of the total protein). The function of casein micelles in milk is to transport high levels of insoluble calcium phosphate and protein to newborns in an easily digestible format. The casein micelles clot in the stomach which slows the digestion of milk, allowing greater absorption of nutrients. 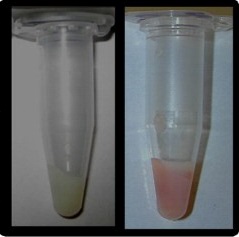 Lactoferrin is a glycoprotein and is found in the whey of mammalian milk. It is an important immune-regulatory and anti-microbial protein, which has iron-binding abilities and can remove iron from its environment. Natural freeze-dried lactoferrin and its solutions are light pink in colour, whereas iron-depleted lactoferrin is translucent and iron-saturated lactoferrin is blood red in appearance.

In his Ngā Kete review article, Dr Anema discusses that when high levels of iron-saturated lactoferrin were added to the milk, the casein micelles took on a significant pink colouration. Another observation was that when the pink milk with extra lactoferrin was stored for prolonged periods of time, it slowly became translucent.

The spontaneous interactions and formed complexes discussed in the review article pose interesting questions about potential practical and commercial applications for the research. Caseins have technical applications including adhesives and paper coatings, and there may be a possibility that certain solutions (coacervates) could be applied for new technical functions.

The sandcastle worm Phragmatopoma californica secrets an adhesive that allows it to build shelters for itself in the ocean, by gluing together grains of sand. The sandcastle worm secretion is mostly made up of oppositely charged proteins. Further investigation into spontaneous interactions of oppositely charged milk proteins such as those between lactoferrin and caseins, could potentially inspire future developments of new bio-adhesives.

Dr Skelte Anema was made a Fellow of the Royal Society Te Apārangi in 2016 and has been working in the New Zealand dairy industry since 1990. Dr Anema's primary research interests are milk proteins, including whey protein denaturation kinetics, interactions between milk proteins, effects of novel processing technologies on milk protein interactions, and spontaneous protein self-assembly.

The review article 'Spontaneous interaction of lactoferrin with casein micelles or individual caseins' has been published in Ngā Kete and is available free-to-access for a limited time at Taylor and Francis Online.

Next week, the article 'Gold mobility and biology during tectonic evolution of southern New Zealand' authored by Professor Dave Craw FRSNZ will be acknowledged as part of the ongoing weekly celebration of Ngā Kete's inaugural issue.