A team of University of Otago / Dodd-Walls Centre scientists have created a novel device that could enable the next generation of faster more energy efficient internet.

The internet is one of the single biggest consumers of power in the world. With data capacity expected to double every year and the physical infrastructure used to encode and process data reaching its limits there is huge pressure to find new solutions to increase the speed and capacity of the internet.

Principal Investigator Dr Harald Schwefel and Dr Madhuri Kumari’s research has found an answer. They have created a device called a microresonator optical frequency comb made out of a tiny disc of crystal. The device transforms a single colour of laser light into a rainbow of 160 different frequencies – each beam totally in sync with each other and perfectly stable. One such device could replace hundreds of power-consuming lasers currently used to encode and send data around the world. 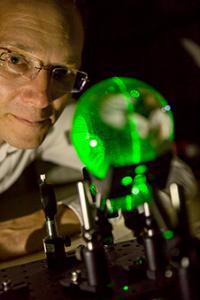 The work was born out of Dr Schwefel’s previous research at the prestigious Max Planck Institute in Germany and his collaboration with Dr Alfredo Rueda who did some of the preliminary research.

The internet is powered by lasers. Every email, cell phone call and website visit is encoded into data and sent around the world by laser light. In order to cram more data down a single optical fibre the information is split into different frequencies of light that can be transmitted in parallel.

“Lasers only emit one colour at a time. What this means is that, if your application requires many different colours at once, you need many lasers. All of them cost money and consume energy. The idea of these new frequency combs is that you launch one colour into the microresonator a whole range of new colours comes out,” Dr Kumari says.

He expects the devices to be incorporated in sub-oceanic landing stations where all the information from land based fibres is crammed into the few sub-oceanic fibres available in less than a decade, perhaps within a few years.

“To develop the device for the telecommunications industry we will need to start working with major telecommunications companies,” Dr Schwefel explains. “We have started the process by collaborating with a New Zealand-based optical technology company.”

This breakthrough is the first milestone in a government funded collaboration between scientists at the University of Otago and the University of Auckland who are part of the Dodd-Walls Centre for Quantum and Photonic Technologies - a virtual organisation gathering New Zealand’s top researchers working in the fields of light and quantum science. The research project has been awarded nearly one million dollars of Marsden Fund money to develop and test the potential of microresonator frequency combs. 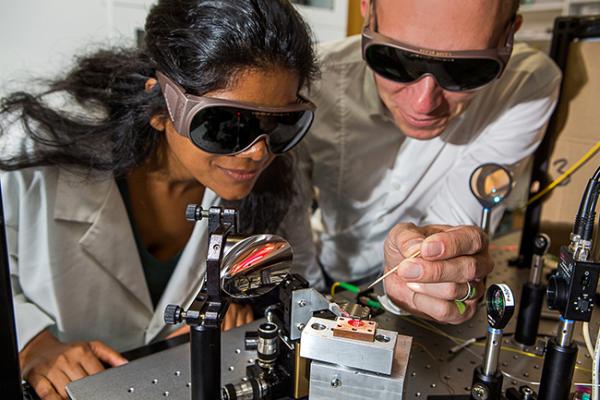 The optical frequency combs are based on a very unusual optical effect that happens when the intensity of light builds up to extremely high levels. You send a single colour of visible light into the crystal disc along with a microwave signal and because the crystal disc is such high quality, the light and microwave radiation gets trapped inside. The light and microwave radiation keeps pouring in and bouncing around and around inside the crystal. In most situations light never changes colour but in this case the intensity becomes so high that the light and the microwave radiation start merging and making different colours. The phenomenon is known as a non-linear effect and it has taken the team many years to optimise.

The only other group in the world making devices of competing quality is a collaboration from Harvard and Stanford Universities in the US, also published in this month’s Nature, but currently Drs Schwefel and Kumari hold the record for the most efficient device. Essentially this means that their crystals don’t leak any light. The trick is to have an extremely high quality crystal. Harald’s group are a world experts in crafting crystal discs in his University of Otago lab.

The internet is just one of the possible applications for the new optical frequency combs. Another use is high-precision spectroscopy — using laser light to study and identify the chemical composition, properties and structure of materials including diseases, explosives and chemicals. Dr Kumari’s next mission will be to explore this application amongst other possibilities.

“This is a very very exciting project to be working on,” says Dr Kumari. “Optical frequency combs have literally revolutionised every field of applications they have touched. You can use them for vibrational spectroscopy, distance measurement, telecommunications. I’m looking forward to seeing how we can use ours.”