It was a few minutes past midnight on 14 November 2016, and I was drifting into sleep in Wellington, New Zealand, when a sudden jolt began rocking the bed violently back and forth.

I knew immediately this was a big one. In fact, I had just experienced the magnitude 7.8 Kaikoura earthquake.

Our research, published today, shows how the slow build-up to this earthquake, recorded by satellite GPS measurements, predicted what it would be like. This could potentially provide a better tool for earthquake forecasting.

The day after the quake, I heard there had been huge surface breaks in a region extending for more than 170 km along the eastern part of the northern South Island. In some places, the ground had shifted by 10 metres, resulting in a complex pattern of fault ruptures.

In effect, the region had been shattered, much like a fractured sheet of glass. The last time anything like this had happened was more than 150 years ago, in 1855.

Quite independently, I had been analysing another extraordinary feature of New Zealand. Over the past century or so, land surveyors had revealed that the landscape is moving all the time, slowly changing shape.

These movements are no more than a few centimetres each year – but they build with time, relentlessly driven by the same forces that move the Earth’s tectonic plates. Like any stiff material subjected to excessive stress, the landscape will eventually break, triggering an earthquake.

I was studying measurements made with state-of-the-art global positioning system (GPS) techniques - and they recorded in great detail the build-up to the 2016 Kaikoura earthquake over the previous two decades.

GPS measurements for regions at the edges of the tectonic plates, such as New Zealand, have become widely available in the last 15 years or so. Here, the outer part of the Earth (the crust) is broken up by faults into numerous small blocks that are moving over geological time. But it is widely thought that even over periods as short as a few decades, the GPS measurements still record the motion of these blocks. 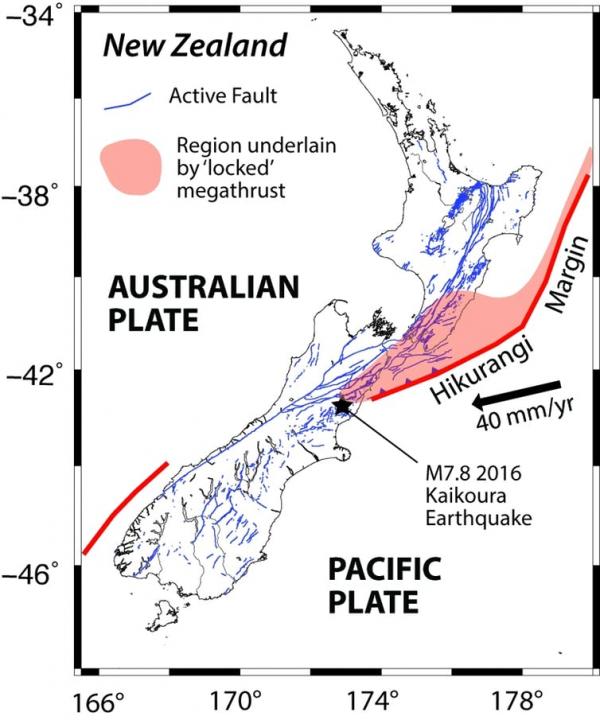 New Zealand straddles the boundary between the Australian and Pacific tectonic plates, with numerous active faults. Note the locked portion of the underlying megathrust. Image: Simon Lamb, CC BY

The idea is that at the surface, where the rocks are cold and strong, a fault only moves in sudden shifts during earthquakes, with long intervening periods of inactivity when it is effectively “locked”. During the locked phase, the rocks behave like a piece of elastic, slowly changing shape over a wide region without breaking.

But deeper down, where the rocks are much hotter, there is the possibility that the fault is slowly slipping all the time, gradually adding to the forces in the overlying rocks until the elastic part suddenly breaks. In this case, the GPS measurements could tell us something about how deep one has to go to reach this slipping region, and how fast it is moving.

From this, one could potentially estimate how frequently each fault is likely to rupture during an earthquake, and how big that rupture will be – in other words, the “when and what” of an earthquake. But to achieve this understanding, we would need to consider every major fault when analysing the GPS data.

Current earthquake forecasting “reverse engineers” past distortions of the Earth’s surface by finding all the faults that could trigger an earthquake, working out their earthquake histories and projecting this pattern into the future in a computer model. But there are some big challenges.

The most obvious is that it is probably impossible to characterise every fault. They are too numerous and many are not visible at the surface. In fact, most historical earthquakes have occurred on faults that were not known before they ruptured.

Our analysis of the GPS measurements has revealed a more fundamental problem that at the same time opens new avenues for earthquake forecasting. Working with statistician Richard Arnold and geophysicist and modeller James Moore, we found the GPS measurements could be better explained if the numerous faults that might rupture in earthquakes were simply ignored. In other words, surface faults seemed to be invisible when looking at the slow movements recorded by GPS.

There was only one fault that mattered – the megathrust that runs under much of New Zealand. It separates the Australian and Pacific tectonic plates and only reaches the surface underwater, about 50 to 100km offshore. Prior to the Kaikoura earthquake, the megathrust was locked at depths shallower than about 30km. Here, the overlying Australian plate had been slowly changing shape like a single piece of elastic. 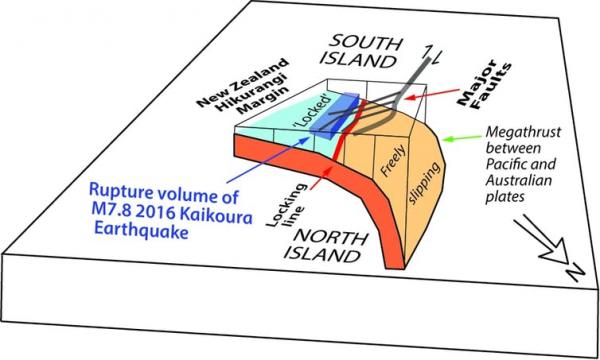 Slip at depth on the megathrust drives earthquakes in New Zealand, including the M7.8 Kaikoura Earthquake. Image: Simon Lamb, CC BY

The pacemaker for future quakes

In the conventional view, every big fault has its own inbuilt earthquake driver or pacemaker - the continuously slipping part of the fault deep in the crust. But our analysis suggests that these faults play no role in the driving mechanism of an earthquake, and the pacemaker is the underlying megathrust.

We think the 2016 Kaikoura earthquake provides the vital clue that we are right. The key observation is that numerous ruptures were involved, busting up the boundary between the two plates in a zone that ran more-or-less parallel to the line of locking on the underlying megathrust. This is exactly what we would anticipate if the slow build-up in stress was only driven by slip on the megathrust and not the deeper parts of individual crustal faults.

I remember once watching a documentary about the making of the Boeing 777 aircraft. The engineers were very confident about its design limits under flying conditions, but the Civil Aviation Authority wanted it tested to destruction. In one test, the vast wings were twisted so that their tips arced up to the sky at a weird angle. Suddenly, there was a bang and the wings snapped, greeted by loud cheering because this had occurred almost exactly when predicted. But the details of how this happened, such as where the cracks of metal fatigue twisted the metal, were something that only the experiment could show.

I think this is a good analogy for realistic goals with earthquake prediction. The Herculean task of identifying every fault and its past earthquake history may be of only limited use. In fact, it is becoming clear that earthquake ruptures on individual faults are far from regular. Big faults may never rupture in one go, but bit by bit together with many other faults.

But it might well be possible to forecast when there will be severe shaking in a region near you – surely something that is equally as valuable.