Home Research updates 'Silent' quakes: Why we need to care about them

'Silent' quakes: Why we need to care about them

The Kaikoura Earthquake might best be remembered for shaking mountains, tearing apart highways and heaving a long strip of coastline out of the ocean.

But, amid what was one of the most complex earthquakes ever recorded, something else strange happened that scientists are still grappling with.

When big quakes like the 7.8 jolt strike, they fire out seismic waves that roll through the earth and can trigger new quakes, further away.

But the knock-on effect observed in the wake of the November 2016 calamity wasn't one that set off those short, sharp, violent events we normally think of as earthquakes.

Instead, the results were deep-seated, slow-burning "silent" events that can carry on from seconds to years, and displace faults without ever being felt by us on the surface.

These were observed over much of what is our largest and most active plate boundary fault, the Hikurangi subduction zone, which lies some 600km from where the main shock was detected.

"This widespread, distant triggering of slow slip was really surprising, and we think it occurred due to stress changes from the passing Kaikoura earthquake seismic waves," said Dr Jon Carey, a soil mechanics scientist at GNS Science.

Beneath the Subduction Zone

Tectonic plate movements at subduction zones, where one plate is forced beneath another, are best known for having kicked off some of the world's most catastrophic quakes.

But advances in GPS monitoring have revealed how these danger areas produce other types of quakes, among them silent or "slow slip" events.

These events may heap stress on nearby fault zones, and play a big part in activating disastrous quakes.

Despite their threat, the underlying mechanisms behind them still aren't well understood.

For instance, a magnitude 6 earthquake that struck near Porangahau in late November 2016 was likely caused by a slow slip event that itself had been set off by the Kaikoura quake earlier that month.

Carey and international colleagues have now begun piecing together the process, using sediment samples recovered from the Hikurangi subduction zone.

They'll also draw on samples from Japan's Nankai Trough, another feared subduction zone that's been the source of a dozen massive "megathrust" quakes over the past 2000 years, the most recent killing at least 1362 people and destroying thousands of homes.

Importantly, the study, supported by a $300,000 Marsden Fund grant, will also aim to establish whether slow slip events could affect the likelihood of future quakes.

While there's not yet enough evidence to be certain, scientists say it's possible the Hikurangi subduction zone could unleash magnitude 9 earthquakes.

Geological evidence has suggested the last magnitude 8 earthquake happened about 500 years ago, although two quakes that measured over 7.0 were recorded offshore of Gisborne in 1947.

Modelling has shown that parts of the East Coast close to the Hikurangi subduction zone - like eastern Wairarapa - could be hit by a tsunami only seven minutes after a major quake. 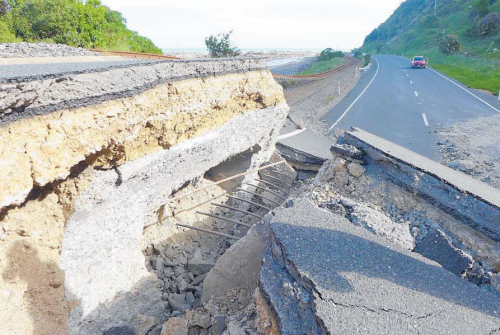 Scientists are still grappling with something strange that happened in the Kaikoura quake. Photo: GNS Science

From Ocean to Lab

Carey said movement behaviour similar to that of slow slip events had already been observed in some landslides.

When analysed, material from these landslides had revealed how rapid and slow landslide movements could occur in response to changes in soil and rock properties caused by seismic shaking from regional earthquakes.

"Given that the overall physics governing both landslides and faults are in some cases similar, there are great opportunities to combine approaches from these fields to bring a unique perspective to the understanding of shallow slow slip event triggering."

At the same time, a large team of researchers working under the International Ocean Discovery Programme were probing the Hikurangi subduction zone from aboard the scientific drilling ship JOIDES Resolution, off the North Island's East Coast.

Along with installing high-tech instruments beneath the sea floor to monitor changes during slow slip events and earthquakes near Gisborne, the scientists were also recovering core samples of sediments, which Carey and his team would analyse themselves.

"GNS Science is one of only a few institutions world-wide with the type of instrument that can simulate the conditions within a shallow subduction zone and subject the sediment to simulated earthquake shaking."

Lab tests will first determine the physical characteristics of the rocks in each subduction zone, before specialist experiments are undertaken to replicate stress conditions at each site and measure how and when slow slip events are triggered by stress changes from passing seismic waves.

"One hypothesis that we plan to test is whether or not the passing seismic waves cause a change in pressure from fluids in the fault zone, which might trigger the slow slip."

All of the data would be combined with the movement records from what remain two of the world's most rigorously investigated subduction zones known to undergo slip in shallow slow slip events and generate large earthquakes and tsunamis.

"We hope that this study will help to explain how distant earthquakes can trigger slow slip episodes at subduction zones.

"By determining how slow slip events are triggered and their relationship to larger earthquakes at the Hikurangi subduction zone we hope to greatly improve our understanding of the potential hazards subduction zone earthquakes and associated tsunamis pose to New Zealand."