Taking the pulse of the Hikurangi subduction zone

Seafloor deployment: Japanese scientists prepare a seafloor instrument prior to deployment off the east coast of the North Island. These instruments sit on the seafloor and record earthquake activity inside the Hikurangi subduction zone.

A new study has given scientists a better understanding of the way plate tectonic stresses build up and are dissipated on the Hikurangi subduction zone, east of the North Island.
Photo: Steven Plescia, University of Colorado

This will help to bring science a step closer to being able to forecast the likelihood of damaging earthquakes and tsunamis on this major fault.

Led by GNS Science, the study involved the detailed analysis of several hundred earthquakes between Hawke’s Bay and East Cape to produce the first direct physical evidence of the way stresses change before, during and after slow-slip events.

Slow-slip events are a feature of this region, occurring on the subduction zone every 12 to 18 months.

The research paper titled ‘Episodic stress and fluid pressure cycling in subducting oceanic crust during slow slip’ was published in the journal Nature Geoscience this week.

It has clarified the mechanisms at play deep inside the fault by focusing on a zone between 15km and 35km below the surface where the Australian and Pacific tectonic plates meet.

Lead author and seismologist at GNS Science, Emily Warren-Smith, said the study had shown it was possible to keep track of stress changes at the plate interface by accurate monitoring of earthquakes. 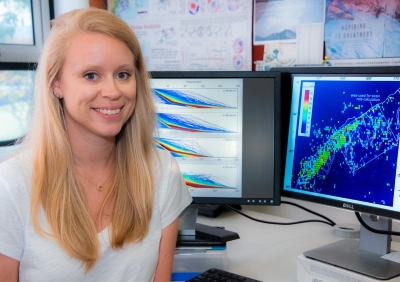 "Quantifying how stress and pressure is accumulated and released around the plate boundary interface during slow-slip cycles is crucial for understanding the physics of subduction systems and contributing to the forecasting of earthquake and tsunami hazards in these areas" - Dr Emily Warren-Smith. Photo: Margaret Low GNS Science

It included data recorded by the national seismic and geodetic network operated by GeoNet alongside 20 Ocean Bottom Seismometers deployed off the East Coast of the North Island in 2014-2015 as part of collaborative research with organisations in Japan and the United States.

Prior to this research, scientists had hypothesised that a build-up of stress and pressure from fluids on the deep parts of faults may trigger them to slip, but the physical evidence to support this was lacking.

The study found that a certain type of small earthquake started occurring in the subducting (or downgoing) plate in the lead up to slow-slip events.

“This type of small earthquake can only happen when there is a lot of fluid around at very high pressure. They started disappearing once the slow-slip event finished, suggesting the pressure had dropped again,” Dr Warren-Smith said.

The study concluded that highly pressurised fluid released from the subducting plate travels upward and lubricates the interface between the two plates. This initiates a slow-slip event where a large patch of the fault moves slowly and benignly for weeks or months and then stops. Deformation during the slow-slip event then acts to temporarily relieve the pressure before the process starts over again.

Repeated cycles of this pressure build up and release seem to control how often slow-slip earthquakes occur on particular parts of the subduction zone.

“Quantifying how stress and pressure is accumulated and released around the plate boundary interface during slow-slip cycles is crucial for understanding the physics of subduction systems and contributing to the forecasting of earthquake and tsunami hazards in these areas.

“We argue that increased monitoring of earthquakes around the Hikurangi subduction zone, including a permanent network of offshore instruments, will accelerate the development of reliable forecasts of potentially damaging subduction earthquakes.

“We are still a long way from being able to forecast when a major earthquake will occur on the Hikurangi subduction zone, but this is an important step along the way.”

Dr Warren-Smith said the findings had international significance and would open up new avenues of research at other plate boundary zones around the world.

“Now we know what signals to look for, we can start to examine other subduction faults to see if they behave the same way, not just in New Zealand, but worldwide.”

The study was funded by a Marsden grant with additional support from MBIE’s Endeavour Fund.