In the New Zealand Journal of Marine and Freshwater Research, researchers examine the bloom of 'Bonnemaisonia hamifera' in the South Island to identify its potential threat as an invasive species in New Zealand.

Bonnemaisonia hamifera is a species of red alga with a native range in the North Pacific Ocean. It has become widespread in the North Atlantic and is most commonly found on temperate coasts of Europe and North America. On European coasts, this species is considered invasive.

They produced the first-ever report of the tetrasporophytic ‘Trailliella’ stage of red algal genus Bonnemaisonia in the Southern Hemisphere.

Their study focused on the Waikouaiti River Estuary, Karitāne, and the outer coast at Te Awa Mokihi (Butterfly Bay), South Island, where the bloom is most prevalent.

Aerial images drawn from the study reveal abundant blooms in the mouth of the Waikouaiti River in Karitāne, north of Dunedin. 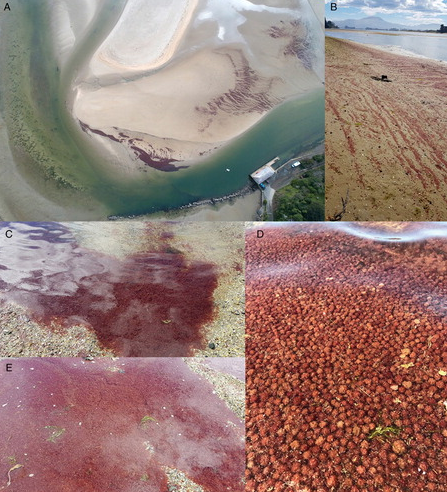 The Waikouaiti River Estuary Wetlands Complex is also known as Mertons Swamp, and is recognised as having a rich wetland environment. It was established as a Wildlife Management Reserve in 1980. It is a scarce wetland type, featuring a strong saltmarsh community with scarce glasswort (Sarcocornia quinqueflora) and jointed rush.

The wetlands are home to many native rushes and sedges, and fauna such as Pied Stilt (Himantopus himantopus) and Paradise Shelduck/Putangitangi (Tadorna variegata). Traditionally, the wetlands were a rich source of kai for Māori, having large quantities of tuna (eels), black flounder (Rhombosolea retiaria), giant kokopu (Galaxias argenteus) and waterfowl. The wetlands were particularly valued as a spawning ground for whitebait/inanga (Galaxias spp.)

Garbary, D’Archino, Flack, Hepburn, Nelson, Pritchard & Sutherland discovered a large floating disperal of B. hamifera in the Waikouaiti estuary and on the nearby open coast on the South Island. They attribute this sudden abundance to the nation’s summer heat wave of 2017-2018.

The research article warns that at this quantity, the species can easily become widely distributed in New Zealand—invading and disrupting many other vital ecosystems and communities.

David J. Garbary is a Professor in the Department of Biology at St. Francis Xavier University in Nova Scotia, Canada. Dr Roberta D’Archino is a Marine Biologist at NIWA in Wellington. Brendan Flack (Kāi Tahu, Kai Te Ruahikihiki) is Tangata Tiaki for Kāti Huirapa and Chair of the East Otago Taiāpure Committee.  Christopher D. Hepburn is a Senior Lecturer in the Department of Marine Science at the University of Otago. Wendy A. Nelson is a Programme Leader at NIWA and a Professor in Biological Sciences at the University of Auckland. Dr Daniel Pritchard works with Te Rūnanga o Ngāi Tahu as Principal Scientist within the Te Ao Tūroa Mahinga Kai team. Dr. Judy E. Sutherland is a Molecular Biologist at NIWA in Wellington.

The research article ‘First record of Bonnemaisonia hamifera (Bonnemaisoniales, Rhodophyta) in the South Pacific, from the South Island of New Zealand’ published in the New Zealand Journal of Marine and Freshwater Research, is available to read in full at Taylor & Francis online.