The science of toxic algal blooms

For a small organism, cyanobacteria can pack a powerful toxic punch

Originally published in RNZ: Our Changing World, by Alison Ballance

Cyanobacteria, or blue-green algae as they are sometimes called, are a kind of microalgae.

They are the cause of the toxic algae warnings that happen every summer in New Zealand. When local councils start finding mats of blooming toxic cyanobacteria in local rivers, they post warnings for people to avoid the area, and in particular keep dogs away, as the toxin is fatal for dogs.

Discovering what species of cyanobacteria we have in New Zealand and better understanding their biology is the job of experts at the Cawthron Institute in Nelson.

The Cawthron Institute Culture Collection of Microalgae (CICCM) is a nationally significant living collection of cyanobacteria.

Part of the collection is housed in a small, well-lit room filled with hundreds of small flasks, each containing a brew of cyanobacteria.

Freshwater scientist Dr Jonathan Puddick explains that the collection is funded by the Ministry for Business, Innovation and Employment.

“They task us with finding interesting strains of these little floating plants, which exist in our marine and freshwater environments around New Zealand, and isolating them and then taking care of them so that researchers in the future … can get access to them.” 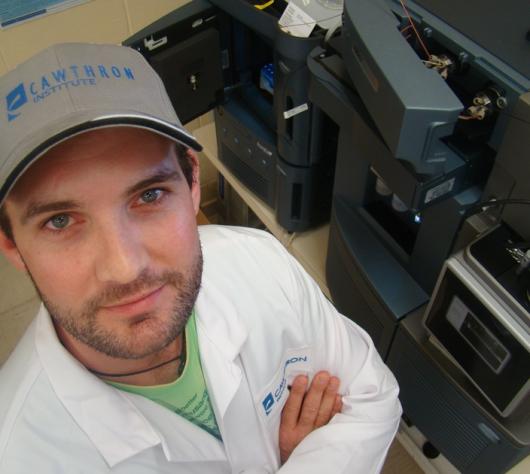 “We've got about 500 strains of cyanobacteria [in the collection], and that probably spans about 50 different species.”

Jonathan says the bacteria live a simple lifestyle, which makes them easy to maintain in the lab. “They harvest energy from the sun like a plant would, and they turn that into sugars and they basically only need a few nutrients to be able to do that.”

When conditions are unfavourable, cyanobacteria form a resting stage that can survive at the bottom of rivers and lakes until conditions improve.

“I describe the dormant stages as going down into a nuclear bunker,” says Jonathan. “They store away lots of food, [especially] carbohydrates and they'll make a nice sort of thick cell membrane, or a wall, around the cells. And then down they go and they sit at the bottom and they just wait.”

Jonathan says his research is trying to “understand the toxins which they are producing.”

While some species of cyanobacteria, such as the cosmopolitan species Microcystis, produce toxins, other species, such as the native Dolichospernum, are non-toxic.

Jonathan and Master’s student Rossella Nicolai are currently working on a Marsden -funded project called ‘Blooming buddies’. They are investigating the suggestion that non-toxic bacteria can take up and store toxins from the environment.

“It could be that they are taking advantage of toxic friends,” says Jonathan.

So far, their experiments have shown that a range of non-toxic species are able to sequester the toxin microscystin when it is provided in the environment.

Jonathan says he was surprised to find that 13 of the 18 strains they tested took up the toxins, as he hadn’t expected such a high rate.

He was also surprised by which ones took up the toxin.

Jonathan says he is not sure why the non-toxic species take up toxins, or even why toxins are produced in the first place.

He says the cyanobacteria must get a benefit from producing toxins and it’s thought it may make the bacteria more efficient at photosynthesis. The next part of his experiment will involve seeing if rates of photosynthesis in non-toxic species improve after they have been provided with toxins.

“It opens up whole new avenues of questions,” says Jonathan.

Additional information: Listen to The science of toxic algal blooms on RNZ's Our Changing World,