Ngā Kete: The Annual Collection of Reviews. This week's highlighted article is by Professor David Craw FRSNZ and reviews how geological changes in Te Tiritiri-o-te-moana affected both freshwater fish species and gold mobility.

In this review article 'Gold mobility and biology during tectonic evolution of southern New Zealand' published in Ngā Kete: The 2018 Annual Collection of Reviews, Professor Dave Craw from the University of Otago discusses how a difference in freshwater fish genetics shows that early-formed rivers on the eastern side of Te Tiritiri-o-te-moana transported gold parallel to the Alps for hundreds of kilometres before subsequent tectonic activity altered the rivers into their modern layout.

Relationships between biological and geographical processes occur on a large and small scale within a range of settings in New Zealand, and further investigation into their relationships could help resolve a multitude of questions.

A rain shadow is a dry area on the leeward side of a mountainous area (facing away from the wind). The crags of a mountain form a barrier that blocks weather-carrying systems by drawing the wind and moisture in the air towards the top of the mountain. However, before crossing the summit, the moisture in this moving air condenses and precipitates, so the wind has significantly less moisture content as it moves over and across the mountains.

The rain shadow of New Zealand's Southern Alps is one of the most remarkable in the world. Although nearly 9 metres worth of rain comes in from the Tasman Sea and is precipitated yearly, in the rain shadow side of the Alps, some areas will barely register 0.3 metres of moisture yearly, which results in a starkly different environment.

Gold particles formed in the Alps move on a sort of tectonic conveyor belt, and the dry rain shadow area of Te Tiritiri-o-te-moana has meant quite large gold nuggets are found in the basement rock and sediment. Through its journey down the mountain, the eroded gold-laden sediment can be re-uplifted and enter river courses. As tectonic activity shaped these mountains, it also shifted in parallel and with erosion carved the modern river drainage systems. These changes influenced biological evolution as well as biogeography.

Gauging exactly how these river systems changed over time using geological data is difficult, as most of the record has been erased by later erosion. However, the biological data of freshwater fish residing in the rivers can provide some of the missing pieces to the puzzle.

In the review article, Professor Craw shows how fish species evolve over time they maintain a biological memory of their genetic history, which can contribute to the understanding of geological processes in their area. One noticeable genetic discontinuity is when certain fish species became separated onto different sides of the mountains through tectonic events. All of these fish had common marine-ancestors but became freshwater fish during the rise of this mountain chain.

The concentration and transport of gold particles occurred via short, steep rivers and glaciers to beaches on the western side of the mountains; on the eastern side the particles moved through longer, lower-gradient rivers. The gold mobility across the ranges therefore occurred in parallel with the fish's biological evolution. 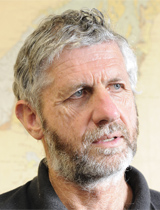 There is a scarcity of research into the fish's genetic data, particularly in the areas connecting Canterbury and Otago. More comprehensive data combining biological and geological knowledge could be useful to further investigate what was likely an important, dominant river system in the early evolution of the South Island.

Professor Dave Craw is the Professor of Economic Geology at the University of Otago and was made a Fellow of Royal Society Te Apārangi in 2016. His research interests include environmental geology, plate tectonic formation of mountain landforms and the processes that occur beneath the actively forming mountains. These processes lead to formation of gold deposits in modern and ancient mountain belts.

The review article 'Gold mobility and biology during tectonic evolution of southern New Zealand'' has been published in Ngā Kete and is available free-to-access for a limited time at Taylor and Francis Online.

Next week in Alert, the highlighted article from Ngā Kete will be 'Ammonia oxidisers and their inhibition to reduce nitrogen losses in grazed grasslands: a review' by Professor Hong Di FRSNZ.