Using maths to predict the weather and more

In the review article 'Understanding the geometry of dynamics: the stable manifold of the Lorenz system' Professor Hinke Osinga from the University of Auckland reviews research into dynamic systems theory, an area of mathematics that can help us predict the weather amongst other things.

Ordinary differential equations are used in many different areas of science and engineering, particularly to help us understand how different types of behaviour arise under the influence of internal or external factors. Dynamical systems theory can help us explain the uncertainties in weather prediction and why it is almost impossible to forecast the weather more than a week ahead.

The theory of dynamical systems provides analysts with an extraordinarily useful language for interpreting a wide range of models across the sciences, as it effectively tells the user what to expect and what to look for in a given system.

It can be used to identify the critical boundaries and appropriate parameter ranges in which a certain behaviour can be seen. The characteristics of these boundaries are called invariant manifolds, and these objects can often only be identified with advanced mathematical techniques.

The particular manifold Professor Osinga discusses in depth is called the Lorenz manifold, it exists in the so-called Lorenz system that was originally constructed to describe weather patterns like convection in the atmosphere, but that also holds great importance as an outstanding example of a chaotic system, one that exhibits unpredictable and surprisingly complicated behaviour.

Professor Osinga suggests that advanced methods have now matured to a point that detailed mathematical statements can be made with this kind of mathematical approach, and similar methods have now been applied to explain the spiking behaviour of brain/neuronal cells and also complicated oscillations in chemical reactions among its wide range of possible applications. 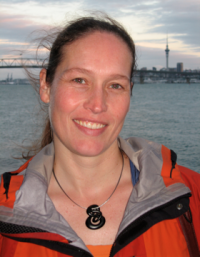 Professor Hinke Osinga was the first female mathematician to be made a Fellow of Royal Society Te Apārangi in 2016, and is Professor of Applied Mathematics at the University of Auckland. Professor Osinga's research is in the field of dynamics and concerns the characterisation and computation of geometric objects. Hinke also created a real-life manifestation of the Lorenz manifold in crochet form, using computer-generated instructions.

The review article 'Understanding the geometry of dynamics: the stable manifold of the Lorenz system' has been published in Ngā Kete and is available free-to-access for a limited time at Taylor and Francis Online.

Next week in Alert, the final highlighted article from Ngā Kete will be 'Listening to Papatūānuku: a call to reform water law' by Professor Jacinta Ruru FRSNZ.