Professor Vic Arcus and Professor Louis Schipper from the University of Waikato are two of four key principal investigators leading a project that aims to determine whether there’s a single theory of temperature dependence that applies to life. Their research involves collaborating with nine other scientists from the US, UK and Australia, all with different scientific backgrounds, to gather data from different time scales and global ecosystems to test their theory.

“There are some really important outcomes that can come from this,” says Professor Schipper. “We’re trying to understand how biology responds to temperature, right across a range of spatial and time scales. What we find can tell us more about how things have evolved through time as temperature has changed, and it will allow us to make better predictions about how the biology of the world is going to change as the world warms up”. 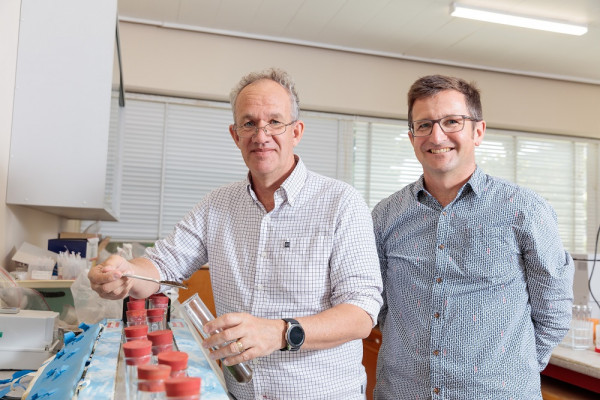 Professor Arcus and Professor Schipper have recently received a first-ever Marsden Fund Council Grant worth $3 million, which is given specifically for large interdisciplinary research projects. Professor Arcus, an expert in enzymes, says the crux of their research comes down to what happens at the molecular level, and how enzymes – macromolecular biological catalysts that speed up chemical reactions in the body – affect biology at different temperatures.

“We’re adding all this carbon dioxide from fossil fuel, but biology is responding to that and it’s very unclear how biology is going to respond if temperatures continue to rise. At the moment we’re looking at carbon dioxide in the atmosphere, which gets pulled into plants by photosynthesis, and Professor Schipper is looking at biologically produced carbon dioxide that goes up into the atmosphere, via a process called respiration. If you want to know what the whole biosphere is going to do as the temperature goes up, you need to know what photosynthesis and respiration are going to do.”

Professor Schipper says their current research around plant respiration will be the foundation of their Marsden project. And if successful, they could answer whether there’s a single theory for what is being observed across a breath of scientific disciplines. “Vic came up with this beautiful equation, and beautiful theory, that we are testing. We don’t yet know if it’s absolutely correct, but it comes from really strong theoretical background and it explains what we both observe, and what our other colleagues observe, in our respective scientific fields.”

Additional information: Waikato researchers aim to find out what happens to life as the world heats up