An international team of scientists will study a hydrothermally active submarine volcano northeast of White Island to learn more about how metals move through the Earth’s crust, as well as how life forms live in this extreme environment.

A two month long expedition set out yesterday (Wednesday 9 May) from Auckland with the mission to drill three boreholes into Brothers submarine volcano in the Kermadec arc, 400km northeast of White Island. It will be the first project of its type carried out anywhere in the world.

The $15 million USD project sets sail aboard deep sea research vessel JOIDES Resolution which is operated by the International Ocean Discovery Program (IODP). 23 countries are involved with the expedition, which is being jointly led by scientists from GNS Science and Woods Hole Oceanographic Institution (USA). 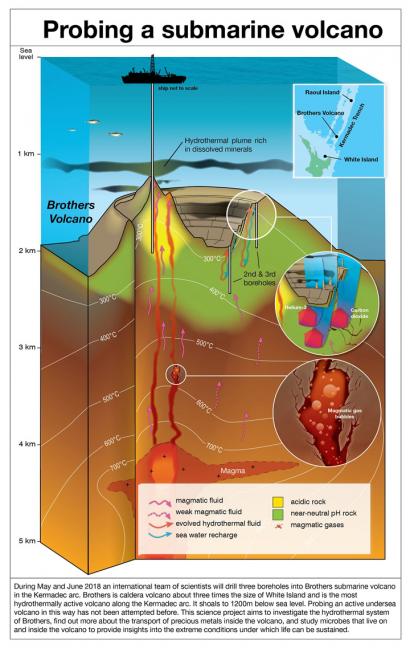 The mission’s most ambitious borehole aims to reach a depth of about 800m into a cone growing up inside the caldera of the volcano, and the other two will reach depths between 400m and 570m at the top and base of the caldera walls respectively. The drilling is likely to encounter rock material as hot as 400°C.

“We don’t really know the full range of metals and in what quantities we will find at Brothers, or even how they are distributed within the volcano. But if the chimneys sitting on the seafloor are anything to go by, we suspect we will see networks of veins beneath the seafloor that will be host to significant copper, zinc and gold mineralisation.”

In addition to the earth science aspect of the voyage, the scientists will also study the unusually rich biological life at Brothers. The hundreds of vents and chimneys, some as tall as 20m, that discharge fluids with temperatures up to 310°C are focal points for a wide range of marine life from microbes to tubeworms.

“We expect to discover microbes in this extreme environment that are completely new to science,” Dr de Ronde says.

As well as tolerating temperatures as high as 120 degrees Celsius, some of the micro-organisms are happy to live in fluids that are "as corrosive as battery acid".

Understanding and learning more about the thermal and chemical tolerances of life thriving around Brother's hydrothermal vents is likely to help evolutionary biologists better understand how early life forms began on earth.

IODP is an international research collaboration that conducts seagoing expeditions to study Earth’s history and dynamics recorded in sediments and rocks beneath the ocean floor. New Zealand participates in IODP through a consortium of research organisations and universities in Australia and New Zealand, including GNS Science, NIWA, The University of Auckland, Victoria University of Wellington, and University of Otago.