The Julius von Haast Fellowship is offered to internationally recognised German researchers in conjunction with the Ministry of Business Innovation and Employment and the Alexander von Humboldt Foundation.  The application process is administered by the Society.

The Fellowship allows internationally recognised German researchers to spend time working collaboratively with their New Zealand colleagues, and to establish, or enhance, collaborative research of benefit to both countries.

The Applicant must be a New Zealand-based Research Organisation, which will act as the New Zealand Host (the Host).  The Host will have the ability to leverage strategic benefit of the Fellow to catalyse capability and capacity development in New Zealand. The Host is expected to connect the Fellow beyond its own institution.

A Julius von Haast Fellowship will be awarded for three years. Each year of tenure the Fellowship Award will comprise an annual payment of:

The research and travel allowance cannot be used for salaries, equipment purchase and depreciation, student fees, or scholarships.

The Julius von Haast Fellowship is open to all fields of research, science and technology (including social sciences and the humanities), and related areas of expertise.

In addition to the general eligibility requirements of the Catalyst: Leaders:

The application must include a copy of each of the following documents for the German researcher:

The Society will notify Applicants of the outcome by email through their Host institutional Research Coordinator no later than 7 weeks after the close of applications.

The Julius Von Haast Fellowship is a sub-programme under Catalyst: Leaders. For information on how to apply, please download the Catalyst: Leaders application guidelines from the current open call page.

The Fellowship will be paid over four payments. The first payment will be made upon signing of the contract, with additional annual payments being made following the acceptance of a satisfactory annual report detailing progress on milestone activities achieved within each year.

Any deviation from this principle must be justified and accepted by the Society’s Director – Research Funding, in advance.

Payment will be by direct credit, upon receipt and assessment of the Annual activity report. 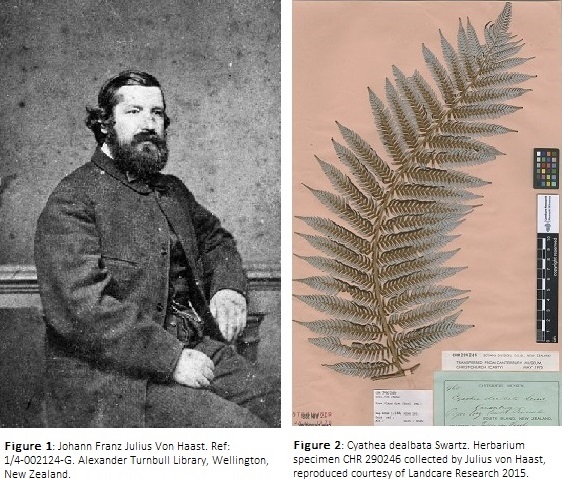 Sir Johann Franz "Julius" von Haast was a German geologist, explorer and writer who founded Canterbury Museum in Christchurch New Zealand in 1861¹. Haast was the provincial geologist of Canterbury from 1861-1871 and his explorations are remembered in New Zealand by locations such as the Haast Pass and Franz Joseph Glacier, which Haast named after the Emperor of the Austro-Hungarian Empire². In his explorations, he collected many plants previously unknown to science, and many genera and species named after him today.