Home What we do Our funds and opportunities CREST Awards Gold CREST recipients 2005 | Rosie Keane, Ellen Jones and Victoria McLennon 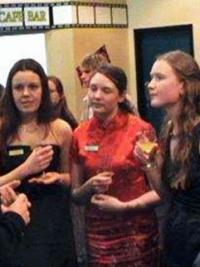 Summary of the project:

The premiere of re:generation before an invited audience was the culmination of an 18-month project designed to research, analyse and present the findings of an investigation billed as ‘a finger on the pulse of teenage opinion on the city’. Rosie Keane, Ellen Jones, and Victoria McLennon, all aged seventeen, created the documentary to voice youth opinions to community influencers. re:generation asks the question – ‘Are the local youth satisfied with what the city provides? If not, why not, and how can we change that?’”

re:generation has been submitted for Gold Team CREST, a national award not attempted before. Victoria says to get Gold Team CREST, “…would be a particularly great achievement for the team because ours is not the classic CREST project.”

Rosie explains, “CREST stands for Creativity in Science and Technology. Many people achieve CREST awards with science-fair type projects. Our project focuses on our creative talents, using film technology to address an issue relevant to us and teenagers around us.”

Project consultant Dr. Heather Meikle says, “CREST students are required to demonstrate creativity, perseverance and determination. Victoria, Rosie and Ellen have shown all these qualities in creating re:generation and have raised valid and important community issues through the project.”