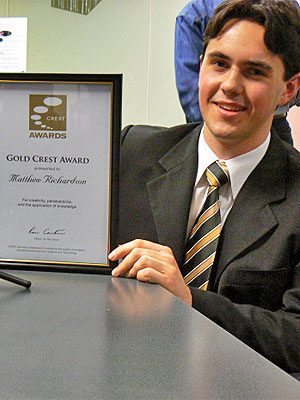 Matthew Richardson was awarded his Gold CREST Award for his development of NavBot a Local Positioning System for indoor navigation of a robotic device.

The idea of developing a Local Positioning System for indoor navigation of a robotic device came as a spin-off idea from a previous project I had worked on, a remote controlled lawnmower. While considering what additional features I could add, I thought about how I could use some form of GPS (Global Positioning System) navigation to automatically guide the mower around the lawn. However upon doing research, I foundthat the accuracy of GPS would not be suited to such a task. That prompted me to start considering additional options, which led to the idea about creating a local-area version of the GPS system that could be suited to a number of applications. That’s where the NavBot system comes in. Using fixed ground stations (beacons), a robotic device can pinpoint exactly where it is within a specific environment.

Whereas GPS uses radio signals to determine the location of an object (accurate to approx 15m), the NavBot system uses high-frequency ultrasonic sound to enable the robot to measure its distance to the beacons and determine its position accurate to within 2-3cm. The overall design involves a fusion of hardware, software and mathematics to enable the robot to find its location.

The NavBot robot is comprised of two boards that contain many components including a microprocessor that has been programmed to control the robot, a radio transmitter, speech synthesis chip (which enables the robot to provide audible feedback of what it is doing) and an ultrasonic sensor to receive signals from the beacons. To find its position, the robot must first measure its distance to each beacon. It does this by measuring the time delay between the ultrasonic sound being sent from the beacon and being received by the robot. Due to the transmission speed being a ‘constant’ (i.e. the speed of sound, 330m/s), it can then easily calculate the distance covered in that time period. However one cannot entirely rely on this assumption for accuracy, as the speed of sound varies with temperature. NavBot corrects for this variance by measuring the ambient air temperature and thus calculating an exact value for the speed of sound, which can be used in its distance calculations.

The robot triggers the ultrasonic transmission by sending a command to a particularbeacon via radio. Each beacon is hard coded with a particular identifier (or number) so that it will only respond when directly ‘called’ by the robot. If for some reason the robot cannot receive the ultrasonic signal from a beacon, it will pivot around until it can detect a valid signal. Once it knows its distance to each of the beacons, it then transfers this data to the maths co-processor. This device uses a series of mathematical equations to calculate the exact position of the robot – so just like GPS, the robot is able to ascertain exactly where it is within its environment.

Matthew was a participant at Realise the Dream in 2004 and 2005 and won a major award to travel to the Beijing Creation in Science Competition in March 2006.For more information about Realise the Dream go to http://www.realisethedream.org.nz

Realise the Dream is now Powering Potential. Find out more about this programme here: https://royalsociety.org.nz/what-we-do/funds-and-opportunities/powering-potential/

Matthew has also been a Supreme Winner at the Brightsparks HiTech for two years in a row: once for a remote controlled lawnmower and for the NavBot. For more information about Brightsparks go to http://www.brightsparks.org.nz