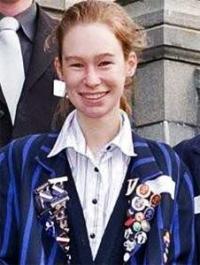 Emily’s project involved monitoring weather conditions in typical urban locations: Measuring equipment was designed, constructed and calibrated,and monitoring took place over a period of several months, first at a normal Auckland home (a location with a fairly uniform spread of small one-storey houses and then on the roof of the science block at school (the roof of a second-storey wing of a three-storey building; there were other higher buildings in the vicinity, but not directly next to the building). The monitoring took place over a period of months, giving a large amount of data which could be used to make decisions about the viability of the three kinds of power generation.

When considering the usefulness of solar panels, the most important piece of information is the number of ‘sunshine hours’ that are available in the relevantlocation. Emily’s monitoring system therefore used  a sunshine monitor including a photodiode, the output of which was recorded by a computer. Once the approximate magnitude of the diode output which corresponded to levels of light which could be considered ‘sunshine time,’ had been established, the number of ‘sunshine hours’ could be calculated, and this was converted to the amount of energy which could be generated. NIWA weather data  was used to extrapolate on the sample findings to predict how many sunshine hours might be expected over the course of an entire year.

For a small wind turbine, it was possible for Emily to estimate how much energy might be generated by considering the theoretical energy  available in the wind, which is of course directly related to the wind-speed. Therefore data on typical wind speeds in an urban location was needed. The monitoring system used a small anemometer (a device to measure wind-speed) based on a shaft rotating in the wind with its turns recorded by a computer. The data gathered by the anemometer could be used to estimate the amount of energy that would be collected by a wind turbine in the relevant location throughout any particular monitoring period. Again, NIWA weather data was used to extrapolate her results to the course of an entire year.

Little research has been done into the generation of energy from rain collected on rooftops. To assess this possibility Emily needed information about the volume of rain falling in any given time. Thus a kind of tipping bucket rain gauge was constructed to measure rainfall rate, with data recorded by a computer. The data gathered by the rain gauge was used to calculate the volume of water falling in a particular monitoring period, and from this, making assumptions about the characteristics of a micro hydro-power system that might be used in a house, it was possible to make estimates about how much energy could be collected over a typical period. Once again, NIWA weather data was used to estimate likely outcomes over the course of an entire year.

Emily discovered that solar power has the greatest potential for producing useful amounts of energy for a domestic household. With seasonal variation taken into account, the average estimated number of sunshine hours available per year to a central Auckland location is 2109 hours. Research shows that for a solar electric system to be viable, at least 1500 sunshine hours are needed per year. A solar power system would thus definitely be a viable source of power in the Auckland area. In real-world terms, estimates suggest that such a system could provide 1690 kWh of energy per year, more than 100%1 of the total energy needs for a typical home.

Emily discovered that the results for the wind turbine were not so encouraging. Taking seasonal variation into consideration, calculations suggest that on average, in an urban Auckland location a wind turbine of radius 0.9 m (a typical industry value) would provide 1.74 kWh of energy per year – only 0.12%1 of the total energy needs of a typical home. This is important in light of the general public’s uninformed enthusiasm for wind power. Financial analysis of the results indicates that a consumer would be very unlikely to recoup their investment on such a turbine; they should also be aware that the carbon emissions saved by generating energy in this way would be unlikely to compensate for the emissions involved in the turbine’s production. A small wind turbine could, in fact, do more harm than good to the environment!

The results for the system based on converting the volume of rain collected on a rooftop into electrical energy were similarly disappointing. Taking seasonal variation into consideration, calculations suggested that on average, a system with a 10 x 10 m collector for rain  based on water falling 2 m to the generator, would provide 46.6 kWh of energy per year – only 2.66%1 of the total energy needs of a typical home. As for the wind turbine, financial analysis suggests than an investment on such technology would not be recouped, and the carbon emissions saved would probably be offset by the emissions during production. These results were less surprising than the results for wind, since the technology does not figure in most serious proposals for domestic power generation, and there is much less public enthusiasm for it. Nevertheless, Emily’s results are useful because they work against a certain public perception that effective power can be generated from almost any source. It is easy for a layman to look at the seemingly large amounts of rain we receive, and ask why we can’t generate power from it; these results provide an answer to that kind of speculation. Renewable energy is not as easy to obtain as the public perception would have it.

Emily has made some recommendations for an urban environment on the basis of her research. First, the results confirm that is unlikely to be worth investigating energy generation from rain any further. Home owners should also be cautioned that, despite the public perception, a small wind turbine is unlikely to be worthwhile financially or environmentally. It can be concluded, however, that solar power systems would be viable in urban Auckland locations, and therefore this is the form of energy generation which could be recommended to anyone considering some form of domestic power generation