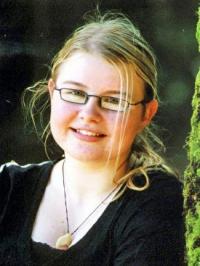 Jessie has been awarded a Gold CREST medal for her three year project investigating the effects of riparian planting on a stream running through farmland.

Jessie selected a site on a dairy farm at Waituna some 35km from Invercargill. The owners had already undertaken a  beautification programme on the farm and had planted an immature riparian zone of poplars on the reach of stream chosen to monitor. This stretch of water ran between grazing paddocks that were used for cows but were not irrigated extensively nor used for effluent spreading. All the paddocks were drained via tile drains that entered the stretch of waterway. All discharged onto the banks of the stream bar one which emptied directly into the stream approximately half way down the monitored area.

The stream was divided into 11 sites for sample collection to determine concentrations of nitrate-N, total phosphorous, ammonia, electrical conductivity, temperature and pH. Along with these determinants of water quality, all sites were investigated for the range of biodiversity (macroinvertebrates and vertebrates). Five of these sites were also used as sample points for determining concentrations of dissolved oxygen.

Pre-planting assessment took place from February to July of 2006 approximately every two weeks.  After each collection of samples, concentrations of nitrate-N, total phosphorous and ammonia were determined in triplicate via colourimetric analysis. This method was selected as it was easy for Jessie to do at home without incurring the costs of professional laboratory assessment. Dissolved oxygen samples were collected in triplicate each month. Determining the concentration of dissolved oxygen was via a titration using the Winkler Method.

Pre planting data indicated that the stream was in a moderate state of health. Nitrate-N, total phosphorous, ammonia and electrical conductivity were all above levels recommended for ecological biodiversity using ANZECC (2000) standards. Biodiversity supported this data with those areas with poorer water quality also being over represented in species that indicate “undesirable” water quality using the SHMAK guidelines.

Of most interest was the impact of the tile drain located approximately half way down the stretch of stream. Here, water emptied directly from the tile drain into the stream. The water quality was poor across all measured variables and the drain was having a noticeable impact immediately downstream. Large amounts of filamentous green algae was clogging the water way and biodiversity consisted solely of undesirable species.

In September of 2006, following consultation with Environment Southland, 250 plants (red tussock and toe toe) were planted along the stretch of stream being monitored. They were planted approximately one metre in front of the existing riparian zone therefore offering another layer of planting closer to the waterway. These were allowed to establish for five months before the next round of testing took place.

Post planting assessment took place from January to July of 2007 and assessed the same aspects of water quality and biodiversity as in 2006.  These results were then compared to data from 2006.

Nitrate-N, ammonia and total phosphorous concentrations improved post planting.  This was significant at all 11 sites for nitrate-N, 3 of the 11 for total phosphorous and 4 of the 11 for ammonia. This was most noticeable at the tile drain. Reflecting this, biodiversity showed a greater range of species and a wider area of occupation compared to 2006 with MCI (Macroinvertebrate Community Index) improving at 7 of the 11 monitored sites. The filamentous green algae that was present immediately downstream from the tile drain was not evident post planting.

Other measured variables i.e. electrical conductivity, water temperature, pH and dissolved oxygen showed no noticeable change between pre and post planting. This again was likely a product of the relative immaturity of the plantings at time of post planting assessment.

It was clear that aside from the influence of cattle directly on the waterway that tile drains that empty into the waterway have a profound impact on the quality of water and associated biodiversity. Long term planning of managing the polluting effects of tile drains could be achieved through the use of wetlands to act as sponges to soak up nitrates (in particular), or creating reservoirs from tile drains that could pass through sand filters or wetlands before entering waterways.

The benefits however are to be considered in the long term. Riparian planting and fencing on farms to prevent access to waterways by cattle and the managing of tile drain outfall will be of generational benefit. The measures that could be taken will be for the benefit of their children and grandchildren. All farmers on a stretch of waterway need to be managing their waterways. A gap anywhere along the strip where stock can access the waterway, damage the stream bank or where tile drains enter directly into the waterway will undo any benefits of planting and fencing elsewhere.

It was clear that this project was more that just planting a few trees to help clean up a waterway. It is far more complex than that. While a riparian zone can have had some benefit, it is likely that a combination of uncontrollable factors such as changes in farming practice (grazing and fertilising), the nature of water quality from tile drains and rainfall patterns can just as beneficial as a riparian zone to water quality.