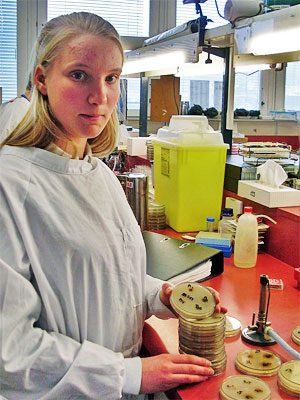 Jessie Bird has been awarded a Gold CREST medal for her investigation into the anti microbial properties of fungi found growing in the local bush. She used a variety of methods to test for the presence of active compounds in the fungi she collected.

Jessie says,”Many commonly used antibiotics in the world today are becoming ineffective as bacteria develop resistance to them and new, untreatable ‘superbugs’ emerge. It is therefore important that new medicines are researched and developed to combat these diseases. Penicillin, the first antibiotic discovered is derived from a fungus, and many plants have antimicrobial properties, so perhaps fungi found in New Zealand native bush could also have antibacterial properties and be of use in medical research. This project explored the possibility that fungi could once more be the needed medical miracle.”

Eight different fungi species were found and collected in two areas of native bush around Tawa, Wellington, during late autumn. The fungi were then identified. A Disk Diffusion experiment was carried out to find if the fungi had antibacterial properties against E. coli and S. Aureus bacteria. Using the most promising fungi Minimum Inhibitory Concentration (MIC) tests were then used to obtain a more quantitative estimate of antibacterial effectiveness. Thin Layer Chromatography (TLC) experiments were carried out to find differences between the extracts of antibacterial active and inactive fungi species.

Through this series of experiments a fungus with antibacterial properties against two common bacteria has been discovered by Jessie. This fungus contains a compound not present in an inactive fungus, indicating that it contains an individual antibacterial compound.