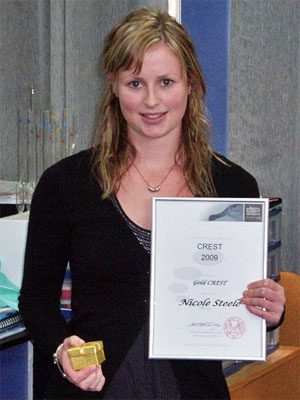 Nicole has been awarded a Gold CREST medal for her investigation into whether prolonged therapy increases the bacteriological cure rate in the treatment of subclinical mastitis in lactating dairy cows. She evaluated the efficacy by varying the number of daily treatments of the injectable antibiotic penethamate to show that 6 days was significantly better than 3 or 0 days in terms of increasing the cure proportion.

Nicole says “Mastitis is an ongoing issue in dairy herds due to the significant impact it has on the quality of milk produced. Cow health and loss in milk production are the major problems caused by mastitis. The development of penicillin resistance increases the likelihood of ongoing problems in dairy herds.  This study investigated the effect of extended antibiotic treatment of subclinical mastitis in lactating dairy cows by evaluating the efficacy of 0, 3 and 6 treatments with penethamate hydriodide at 24 hour intervals. It was hypothesized that increasing the duration oftreatment of subclinical mastitis in lactating dairy cows would result in an increased bacteriologicalcure rate.

Lactating dairy cows (n= 92 cows, 178 glands) from three herds in the Waikato region that had a somatic cell count (SCC) of greater than 200,000 cells/mL and which had the presence a of bacterial pathogen confirmed in one or more glands were enrolled in the study and randomly assigned to one of the three treatment groups; 0 (n = 31), 3 (n = 31) or 6 (n = 30) daily injections of 5 g of penethamate hydriodide (Mamyzin, Boehringer Ingelheim, Auckland, New Zealand).  Milk samples were collected for bacteriology 21 and 28 days after initiation of treatment and individual SCC for each cow enrolled was determined at the subsequent herd test.

The cure proportion for all bacterial species identified increased with increasing duration of treatment (16%, 32% and 56% following 0, 3 or 6 treatments, respectively; p<0.001). For each of the treatment regimes, Staphylococcus aureus, the most difficult pathogen to cure, had a lower cure proportion than minor pathogens or Streptococcus spp. (12%, 28% and 68% for S. aureus, ‘minor pathogens’ and Streptococcus spp., respectively; p<0.001).

Treatment reduced (p=0.045) the subsequent SCC in all enrolled cows, with the 6x treatment group having a lower SCC than the control group (0), with the 3x group in between.

Polymerase Chain Reaction (PCR) was used to investigate the presence of the most common gene (blaZ gene) coding for the production of an enzyme, present to break down penicillin, the in 60 samples of Staphylococcus aureus bacteria isolated pre-treatment. The purpose of this was to establish whether the presence of resistance to penicillin reduced the chance of cure, which was expected.  In addition, zone diffusion sensitivity testing was used to investigate penicillin resistance by phenotypic means (i.e. showing whether the bacteria are sensitive or resistance to penicillin). The results from the two methods of identifying resistance to penicillin were expected to be the same. However, PCR found two out of 60 S. aureus isolates possessing the blaZ gene, while zone diffusion sensitivity testing found 24 S. aureus isolates resistant to penicillin.

Cure was not achieved for either of the two S. aureus isolates that had the blaZ gene present in their genetic makeup. Only one resistant S. aureus isolate achieved bacteriological cure, the remaining 23 penicillin resistant isolates did not cure after treatment occurred.”