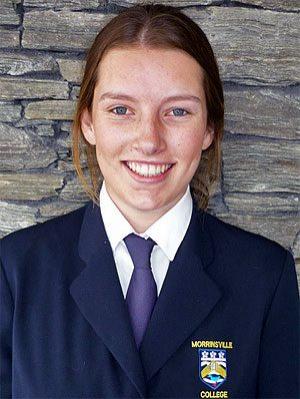 Rebecca has been awarded a Gold CREST medal for her research on agility in netball in particular the techniques of changing direction in a 90 degree turn and exploding into a 5 metre sprint, which are 'subcategories' of technical agility. She designed an agility training program with subsequent collection and anlaysis to show that the students that undertook her training programme improved significantly to those that did not.

Rebecca says that “Agility is defined as a “rapid whole-body movement with change of velocity or direction in response to a stimulus”. The three main components of agility are physical, perceptual and technical. This study looked at the techniques of changing direction in a 90 degree turn and exploding into a 5 meter sprint, which are “subcategories” of technical agility.

Agility is one important aspect of the game of netball  To have the ability to change direction in response to a stimulus without losing too much speed has the potential to give players an edge over their competition. There is a lack of research on agility in netball, which results in coaches not specifically addressing and training these important skills. Despite this, there is a lot of agility equipment that coaches are encouraged to purchase to improve their players ability. Currently there is not a test that produces consistently valid results that allows coaches to assess whether players are improving their agility. This study aimed to improve the technical agility of a group of netballers. A 6 week training programme was designed to improve the agility of Year 9 and 10 students based on data collected from analyzing technical agility tests “

Rebecca’s Investigation One involved two netball teams of nine who took part in initial, progress and final testing to design the 6 week specific technical agility training programme.  The testing required subjects to turn 90˚ and sprint 5 meters.  Only 6 subject’s results from each team were valid which meant measuring their improvement was not achieved, but the analysis of their testing allowed the training programme to be formed.

Rebecca concluded that  these strong improvement in times by the training group shows that specifically targeting technical agility (even over a relatively short time period of 6 weeks) in regular training programmes improves change of direction and sprinting times.  This means that coaches wanting to improve their player’s technical agility must target the components with their drills.  This project shows the improvement of technically trained students compared to other students, however doesn’t provide a method of measuring the subject’s specific agility capability.  Rebecca says that further research needs to be done to determine a reliable test that coaches can confidently use to determine the current level of agility of their players.