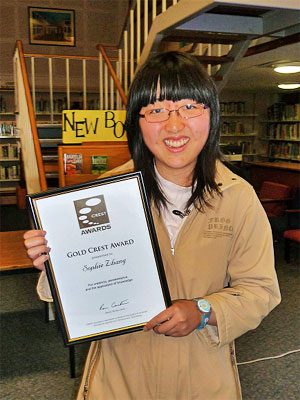 Sophie Zhang has been awarded a Gold CREST medal for her project on trying to develop a way of purifying water using the chemical Titanium Dioxide, TiO2, and sunlight’s natural component of UV light, for use in Vanuatu where many do not have access to clean and uncontaminated water.

Vanuatu was chosen as an area to concentrate on because the social implications of any water purification method must be considered, and it is easier to consider these implications with a focus on one region instead of society in general. There are many places in Vanuatu where there may not be clean drinking water, and whether such a water purification method (using Titanium Dioxide) will be used in Vanuatu needs to be determined. Sophie also thought that information about the water conditions in Vanuatu would be easily obtainable.  In Vanuatu, the majority of water contamination occurs between the source of the water and its destination. Sophie, therefore, decided that a bottle with the top covered would be a good method for prevention of possible contamination.

Sophie had to find a way to minimise Titanium Dioxide concentration in the water  Some adhesives were tested and it was found that Knead-It Multipurpose epoxy putty was appropriate and could  bind the Titanium Dioxide onto plastic. This method rendered filtering to remove excess Titanium Dioxide unnecessary.

Two kinds of Titanium Dioxide were initially tested on E. coli bacteria, but the results were too unreliable to be used in the study. A substitute, Methylene Blue, was used in place of E. colibacteria. The decay of bacteria was modelled by the decolourisation of this organic compound. Experiments were conducted using Methylene Blue in Petri dishes, with the aims of testing to see if the Titanium Dioxide bought from the Paint Factory is a photocatalyst or not, to see whether the black-light blue bulbs can be the constant source of UV light, and whether UV light can go through a thin layer of Gladwrap.

Sophie’s last experiment was to test the effectiveness of the bottle and Titanium Dioxide against a harmless strain of E. coli used for teaching at Palmerston North Girls’ High School. Four bottles were tested in total. They were filled with E. coli-contaminated water and left under a UV lamp. Samples were taken from each bottle periodically. The experiment was done at Palmerston North Girls’ High School, but the 16 samples were given to the Central Environmental Laboratory for them to determine the bacteria count of each sample. All the bacteria counts declined, including the control bottle. From the experiment Sophie could not, therefore, conclude that Titanium Dioxide alone is an effective water purifier. However, from prior studies done by others, Titanium Dioxide has been shown to be capable of killing bacteria. Sophie’s experiment highlighted the ability of short wave UV radiation emitted from the sunlamp in killing bacteria, however in natural sunlight, there is a miniscule portion of sufficiently short wave UV. The contribution of the short wave UV radiation from the sunlamp, coupled with Titanium Dioxide should increase the rate of bacteria eradication compared to just the UV light, so the fact that the control showed a faster rate of bacterial decrease could not be fully explained. Sophie says that if it were possible, this test would be repeated at least three more times, with different factors varied each time, to see if there is a significant change in the results.

Sophie hopes that if a method of water purification is developed, it will be readily used. From the surveys distributed, the general response is that for such a bottle to be used, it must be proven to be safe to use, and a vital piece of information people need is how long the bottle would need to be left under the sun. If more tests were conducted and the bottle was seen to be an effective water purifier, then it would be possible to work out the minimum sun exposure time for the water to be decontaminated and the bottle could potentially be used on a large scale.