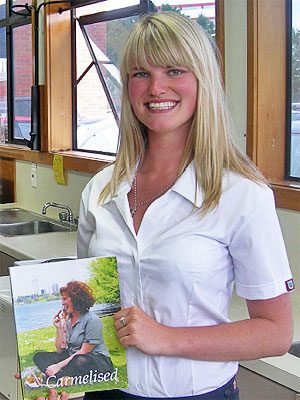 The aim of Kate’s project was to create a Carmel College Cook Book which needed to feature recipes from the school community and was expected to highlight the school’s special character and reflect the mercy values.

Kate was approached by her Food Technology teacher, Mrs. Goonan, and was asked if she would be interested in developing a Carmel College recipe book for her NCEA Level Three project in conjunction with Gold CREST. For some years the Principal had wanted a school cook book to be developed as a fundraising venture for the school.

The first major step in getting started was the collection of the recipes from the Carmel Community. To do this arecipe submitting template was produced and sent out to Carmel College’s data base. Whilst recipes were being sent in, technicalities were researched and a recipe testing template was developed. This was to ensure fair andaccurate evaluations no matter who was doing the trialling. When all recipes were tested and evaluated, in consultation with Eleanor McKay, the sections and recipes within the sections were chosen.

Market research was the next main stage. This involved analysing other school’s cook books and current recipe books on the market to determine the preferred attributes and qualities. Current trends in recipe books were also looked at, in particular those that followed ‘back to basics’ and the revamping of traditional recipes with a modern feel.

A focus group was held as part of the consumer research. From this meeting, brief refinements such as functional traits and aesthetics details that a variety of interested stakeholders liked or disliked were highlighted and discussed to establish further development such as the photography and publishing company.

Alongside the extensive research, meetings with several publishers were carried out to decide which publishing company would best benefit the project for the school’s requirements. If Company A was chosen more of the work would be completed by them and all recipes would need to have been trialled and ready by the end of Term 2 to allow for offshore printing. In comparison, Company B offered a lower outlay fee and a date that everything needed to be submitted by pushed back further in the year. They would also have required greater input from the school to keep the costs to a minimum.

The next main step in the production of the book was the photography. A photographer offered her services for free which was welcomed and the photo shoots were to start the in the school holidays. Organisation of seven sections and therefore seven different photo shoots, each with a different scene, related recipes, students and accessories were needed.

Although many ideas were considered from the onset of the project, the formal idea generation was put into action. Here, the two different names for the book ‘Slice of Heaven’ and ‘Carmelised’ and the themes that corresponded with each were researched in more detail. By the end of this stage it was decided to name the book ‘Carmelised’ and in doing so the colour scheme of the book would consist of caramels, toffees and gold colours. It was here that a compromise between the two styles of photography was made and the decision to have a page at the start of each section setting the scene.

It is hoped that ‘Carmelised’ will be released for sale in March 2011, in conjunction with ‘The Hooley’, (the school’s gala) to be sold for around $30. It is anticipated that the recipe book will be a stylish welcoming book that highlights Carmel’s community and its special character.