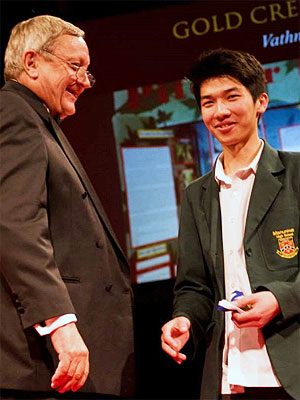 Vathna has been awarded a Gold CREST for his project:

The project involved four, related, experiments: Each experiment was derived and developed based on the results of the previous experiment.

Based on the results from the experiments, Vathna concluded that N. ventricosa’s pitcher fluid had no significant anti-microbial effect on any of the  micro-organisms that were used in his project. There were no significant death zones/clearance zones around the filter paper discs or the wells that contained N. ventricosa’s pitcher fluid. Therefore, his overall conclusion suggested that there is no anti-microbial activity in  N. Ventricosa’s pitcher fluid. However, Vathna’s extensive background research showed that other research has been done on these  Nepenthes plants- with different results! They suggest that the pitcher fluid of  Nepenthes plants does have antibiotic activity and hence are worth looking at medical applications to which this discovery can be applied.i

In addition to investigating the effect of N. Ventricosa’s pitcher fluid, two different types of bacteria were discovered inside  N. Ventricosa’s pitcher fluid. From analysis of their 16S rRNA gene, they were identified as belonging to the genera Pseudomonas and Chryseobacterium. Further research into these bacteria suggested that they might be beneficial to N. ventricosa  plants, because they secrete enzymes that could possibly contribute to the property of the pitcher fluid, i.e. in terms of antibiotic activity and digestive property.