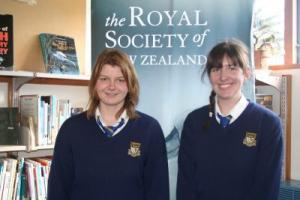 Ashleigh and Keeley have been awarded a Team Gold CREST for their project:

The topic of using cell phones while driving was a controversial topic during the year of 2009, leading to the banning of using them on the roads from November 1st 2009. It was thought that this very topic would be an excellent choice to base a Gold CREST project on, due to the popularity of the discussion at the time.

The aim was to find out what common activities are distracting for teenage drivers on the road today.

Under strict supervision, the experiment took place at Manfeild Auto course in
Feilding. A course with stop signs, 30km/h and 50km/h speed signs was set up
with traffic cones as markers.

Senior students from Tararua College were taken to Manfeild where they each drove
around in either a manual or automatic road car while being distracted.

Each student drove around the track once while being distracted and once without
being distracted. This was also timed. The maximum speed limit was 50km/h which
was only for a short while driving along part of the straights. As well as 50k/m signs there were also 30k/m and stop signs which the participants had to follow.

Each participant had to:

Trevor Weir (a Prodrive tutor since 1994 and is a chief Crash Rescue Marshall at Manfeild Autocourse) accompanied each participant and monitored any students who were swaying from side to side, hitting any cones, not maintaining a constant speed or not obeying the signs.

The results showed that texting and changing music were significantly higher distractions whilst driving.

When comparing participants with their Full versus Restricted Licenses, it was found
that the results were similar except that Full License drivers made more than
twice as many mistakes as Restricted drivers when they were talking.

If Tararua College students were shown the findings of this project, it may  encourage them to drive more carefully.

This CREST project showed results which support the new law banning cell phones whilst driving. Through this project, and the background research that was collected, it also seems reasonable to ban the use of  IPods whilst driving, as they were just as distracting as cell phones.