Home What we do Our funds and opportunities CREST Awards Gold CREST recipients 2011 | Hermaleigh Townsley, Lisa Denny and Natalia Dowrick 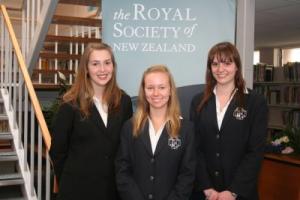 Natalia, Hermaleigh and Lisa have been awarded a Team Gold CREST award for their project:

In 2010, a survey of the earthworm populations of the West Coast of the South Island was carried out during which populations of Amynthas diffringens were discovered. They have been described in the literature as being tolerant of extremes of temperature and moisture and sandy soils. While there is little known about this species in pasture
systems, it is possible that they could have a potential use in pasture agricultural systems in challenging climates and soils. If they have value it would run into the tens of millions of dollars, because in certain parts of New Zealand, specifically the Central Plateau, the soils are extremely challenging for soil biota and hence there is generally no earthworm biology present.

If A. diffringens could be successfully introduced in the Central Plateau, the productivity of existing pastures could be increased significantly by improved nutrient cycling through better organic matter cycling, better plant rooting, and improvements in soil aggregate stability and structure.

To address the major gaps in their knowledge on the ecology and behaviour of A. diffringens in pasture systems, before considering a field introduction of this earthworm species, two controlled greenhouse studies were conducted to find out more about the ecology and ecological niche of this species. One study aimed to establish if this species could survive in the coarse textured soils of the Central Plateau and what food sources A. diffringens consumed. The other study investigated how A. diffringens interacts with the common existing exotic earthworm species found in New Zealand pasture soils.

The ecology study, conducted in 2010, established that A. diffringens was as active in the coarse textured soils as it was in the silt loam, based on live-weight, the amount of food consumed and the number of burrows and casts. This finding indicates that the texture of the pumice soils would not necessarily be a barrier to their successful introduction into the Central Plateau. A very interesting finding of the first ecology study was that A. longa was also active in the coarse textured pumice soil. A. longa was included as a comparison
species due to its known feeding and burrowing behaviour.

Of the three food sources provided to A. diffringens in the first ecology study, the species showed a preference for dung and pasture litter, rather than tree litter. These are two major food sources found in a pastoral system, suggesting that A. diffringens could survive in pasture soils under a permanent pasture grazed by animals.

The earthworm competition study, conducted in 2011, examined the interaction of A. diffringens with other common earthworms found in pasture soils and how they influenced pasture growth and soil quality. A coarse textured pumice soil was used and dung added as a food source. Again A. diffringens thrived in this abrasive soil. Hermaleigh, Lisa and Natalia observed that A. diffringens appeared to occupy a similar niche to that of Aporrectodea caliginosa based on their behaviour. A. diffringens appeared to co-exist with Aporrectodea longa (A. longa) as both species thrived when added together. While existing literature contains descriptions of A. diffringens as being an Epigeic-Endogeicearthworm, this study would suggest that in a pasture system, it behaves more like an Endogeic-Epigeic earthworm. Hermaleigh, Lisa and Natalia are suggesting, in reaching this conclusion, that the behaviour of A.diffringens in a pasture system is more Endogeic than Epigeic, compared to the literature where the reverse is suggested. This information gained about the ecological niche of A. diffringens, is a world first.

A statistical analysis of the data and an analysis of variance was carried out for the key aspects of the tub trial and pot trial.

Despite the coarse textured soils and unusually dry spring condition in 2010, with rainfall less than half of normal, A. caliginosa and A. longa successfully established at all three introduction sites. A.diffringens was not found at the one site where it was introduced alongside A. longa and A.caliginosa. This may reflect the extreme weather conditions that prevailed during the spring of 2010, although the presence of A. caliginosa and A. longa suggests there may be other reasons for its absence. As A. diffringens is substantially more mobile than A. longa and A. caliginosa, the earthworm species may have simply migrated.

A surprising finding was that A. longa was more active than A. caliginosa at all three field introduction sites. This conclusion was based on the size of the earthworms and number of cocoons. This was not expected, but backs up the findings from the first ecological study where A.longa was just as productive in the coarse textured pumice soil as it was in the silt loam. At the field sites, A. caliginosa appeared to thrive more when introduced with A. longa than when introduced alone, based on observations of their size and activity.

Despite the failure to recover the A. diffringens introduced during the field trial, the findings of both ecological studies conducted in the greenhouse and the field trial provide farmers in the Central Plateau with valuable new insights into the ecology of earthworms in this challenging environment. The research also has ramifications for future earthworm introductions in this environment. The current recommendation to introduce the Endogeic species A. caliginosa in situations where no earthworms are present needs to be extended to include the introduction of A. longa along with A. caliginosa. This is based on Hermaleigh, Lisa and Natalia finding that A. longa could first survive and then thrive in the coarse textured pumice soil, and secondly that it creates an environment more favourable for A. caliginosa.

The role A. diffringens might play in New Zealand pasture systems remains an open question.