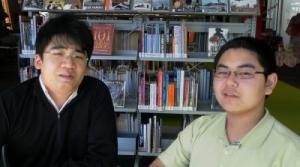 Seok Jun Bing and Alec Wang have been awarded a Team Gold CREST award for their Team Gold project:

The aim of this Gold CREST project was to research, design and develop a concept model of a device capable of reducing the CO2 concentration of car exhaust by 10%.

Climate change is the drastic shift in global weather and temperature patterns that has occurred over the last half century that has the potential to cause massive losses in biodiversity in organisms that are sensitive to climate shifts and as a result of the change in biochemistry and potential habitats that results from theses weather shifts. CO2 gas acts to trap infrared radiation from the sun in the atmosphere causing the rise in global temperatures. By reducing the CO2 concentration of car exhaust the total amount of CO2 emitted by the car is reduced which would help to reduce the rate of climate change due to global warming and the greenhouse effect.
Knowledge in chemistry, engineering and various skills in fabrication were used to design a device which possessed the greatest potential to reduce the CO2 concentration of a car which was then constructed.

Alkaline solution sodium hydroxide (NaOH) reacts with the acidic product of CO2 dissolved in water and through acid-base neutralization reaction to sequester CO2 in a form which can be made solid and stable material which was then capable of being stored and/or resold as an additive in gardening. The following equations show the reactions that are occurring in a summarized form:
CO2(aq) + H2O(l) ⇄ H2CO3(aq)
This is the equilibrium formed when CO2 gas dissolves into water to form carbonic acid, a weak acid.
H2CO3(aq) + 2NaOH(aq) ⇄ Na2CO3(s) + 2H2O(l)

Here carbonic acid reactions with alkaline sodium hydroxide solution to form sodium carbonate (Na2CO3) and water. This is known as an acid base reaction and is the primary chemical mechanism for sequestering CO2 gas. This mechanism is more cost effective and realistic than other methods which require technology that is currently in its infancy and a large amount of money to experiment with.
The device possessed various design features that enhanced the reactivity of the sodium hydroxide solution and the comparatively weak H2CO3(aq). Use of sponges helped to improve liquid-gas contact and diffuse the exhaust gas. Experimental data showed a significant reduction of CO2concentration as a result of the filter. A 9molL-1 solution of NaOH(aq) in the dual stage design demonstrated a mean reduction of 78.6% which is significantly higher than the 10% initially aimed for and set the tone for the rest of the experiments which demonstrated further improvements to the devices.

These test results show that the device was able to perform far above the original expectations, the design can therefore be considered highly successful. The device is proof of the concept of Carbon Capture and Sequestration (CCS) applied to a vehicle is possible with development and further research and may prove to be a highly effective technology in the near future.

Developments such as better solution containment, improved longevity through the use of more efficient feeding mechanisms and enhanced long-term reactivity through the use of catalysts will make such a device economically viable as well as technologically sound. Furthermore these improvements will make the device more environmentally safe as containment will prevent the highly alkaline solution from polluting the ecosystem.
As a secondary development to the filter a system to recover a significant portion of the chemicals consumed during the reaction process is theoretically possible using a set of reactions and a large amount of energy, such a system could reduce the economic impact of the operation of this type of filter and thus make it viable for use by practically anyone. This system would prove to be an interesting development should it be paired with a filter in real time and could possibly enhance the time span over which the filter can operate.