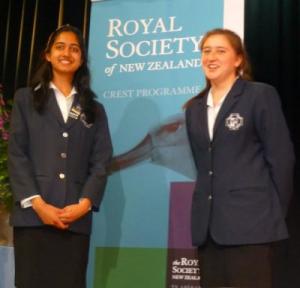 Apurva and Eleanor were awarded a Team Gold CREST award for their project:

CCA treated timber” is timber that has been treated with CCA (a compound containing a mixture of copper, chromium and arsenic), which is a wood preservative used to prolong the life of the wood by preventing it from rotting. However, studies show that CCA leaches out of the wood over time, posing a risk to the environment due to the toxicity of copper, chromium and arsenic.

The aim of Apurva and Eleanor’s investigation was to carry out a risk assessment of CCA treated timber. This aim was achieved by completing the following two objectives:to determine the effect of leaching of CCA on two factors of soil health: the microbial activity and mineral nitrogen content of soil and to develop a new, less expensive method to quantify the leaching of CCA from CCA treated timber.

Apurva and Eleanor achieved their first objective by collecting soil samples around posts of two different ages (posts installed in 1991 and posts installed in 2003) at Te Mata Estate Winery in Hawke’s Bay. The samples were collected using a soil corer at three different distances (0, 10 and 20 cm) from the post, to a depth of 10 cm. Control samples were also collected from the soil area equidistant from the rows of grapevines (approximately a metre away from the posts).

Apurva and Eleanor‘s second objective was to develop a new, less expensive method to quantify the leaching of CCA from CCA treated timber. Current methods involve testing concentrations of copper, chromium and arsenic in surrounding soil and/or water, but these methods are expensive and complex to carry out. If a new, less expensive method was discovered, leaching prevention techniques could be developed more easily and could be also tested for their effectiveness.

For both methods, water surrounding untreated blocks was also tested, as a control. The blocks all had dimensions of 10 cm by 10 cm by 10 cm.