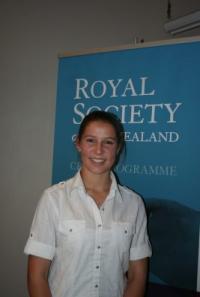 Nicolette has been awarded a Gold CREST award for her project:

Mastitis is an inflammatory reaction of the udder due to udder damage or stress and has a huge impact on the dairy industry in New Zealand. Mastitis leads to significant costs in treatment, time, productivity and reduced returns from lower quality milk. It has been estimated that mastitis costs the New Zealand dairy farmer about $200 per cow, per year or $180 million for the industry.

Teat-end hyperkeratosis (TEH) is a thickening and protrusion of the skin that lines the teat canal and surrounds the external teat orifice. It is a normal physiological response to the forces applied to the teat skin during milking and is often caused by poor milking practice such as high milking vacuum, faulty pulsation and over-milking.

The teat-end is the cow’s first line of defense against bacterial infection either from the environment or from other cows through the milking machine. This means that if the integrity of the teat-end is damaged, by hyperkeratosis, for example, that first line of defense becomes compromised and the health of the udder can become affected. As TEH affects the defensive properties of the teat, this means that the occurrence of mastitis in the teats with TEH could increase. This is due to the fact that the callosity of the teat-end provides a breeding ground for bacteria and these bacteria could then enter the udder, allowing infection to occur.  The most reliable method of judging how severe TEH is, teat-end scoring. Teat-end scoring is an objective measurement of the severity of the levels of keratin that are protruding from the teat-end. It involves individually scoring each teat-end during milking directly after cup removal and before teat spraying.

Cow-level mastitis can be assessed through the use of a somatic cell count (SCC) test. The result reflects the severity of an infection, which is directly associated with clinical or sub-clinical mastitis.

Studies done overseas have shown that there is a linear relationship between teat-end score and SCC but no research has been conducted in NZ in our pasture-based farming system.

The aim of Nicolette’s  study was to investigate:

Teat-end scores were taken at four time points throughout the season, coinciding with the herd tests, which measure cow-level production and SCC. Data from the herd tests and from the teat-end scores were collated to look for associations across lactation. The second part of the study involved sampling a subset of cows from all 4 herds in late lactation, to collect quarter-level data on bacteria isolated from milk cultures, SCC and conductivity score.

The outcome variable, SCC, was analysed in three ways:  infected  (>150K) or uninfected (<150K), new infection between herd tests (cows shifting from <150K to >150K) and as a continuous variable (SCC was logged). TEH was categorized into various cow-level variables with cow level TEH (Normal (N) or Smooth (S) teats were negative and Rough (R) or Very Rough (VR) teats were categorized as positive) and TEH severity, which measured the worst teat-end score that the cow had over its four quarters.

Factors affecting TEH were found to be age, herd and production. Cows aged 5 years and older were more likely to have TEH than the younger cows. Cows with higher production tended to have more TEH than cows with lower production.

In the quarter-level bacteriology study, TEH tended to be associated with SCC infection (>150K) i.e. quarters with TEH (R or VR) were 1.6 times more likely to be infected, but there was no relationship between TEH and bacteria cultured or TEH and conductivity.

The findings from this study could be used by vets for mastitis investigations on farm. Knowing the relationship between TEH and likelihood of infection enables the advisor to understand the degree to which the TEH is contributing to the mastitis problem on farm. By understanding the normal change in occurrence of TEH over the lactation, and the change in relationship between TEH and SCC over the lactation, a vet’s recommendations to a farmer about the prevalence of TEH may be different. This information could enable farmers to look for and record TEH, which gives them another tool when selecting cows for culling or causes of recurrent mastitis by specifically focusing on the cows with VR teat ends.

Conducting the project over a number of seasons would allow more information to be gathered on the previous season’s SCC and teat-end score data. More information needs to be gathered on the causes of TEH and how it can be prevented at herd level, and why there is a change in the degree of association between TEH and SCC as the lactation progresses. More research needs to be done to look at quarters with TEH in early lactation and the types of bacteria cultured from them. Bacteriological samples need to be taken from more cows with a higher prevalence of TEH.