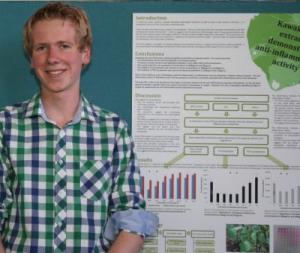 Chris Ryan was awarded a Gold CREST for his project about the scientific evidence of Kawakawa’s medicinal activity.

Rongoā is the traditional Māori way of treating illness and disease.  It includes herbal medicines made from plants, physical techniques (like massages), and spiritual healing techniques.  An important part of rongoā is the use of plants and herbs to combat and prevent both physical and spiritual sickness.  Accounts of rongoā indicate that Kawakawa (Macropier excelsum) was useful for treating a wide range of ailments as it was, and still is, used extensively in traditional Māori medicine.

Kawakawa (Macropiper excelsum) is a New Zealand native plant.  It is found in coastal regions of New Zealand (Metcalf, 1972) as far south as Banks Peninsula as well as on Chatham Island.  It forms a bush or small tree and grows up to 6 meters in height.  The leaves are heart shaped and are often riddled with holes, which are caused by the larva of the native moth, Cleora scriptaria.

Many sources discussing rongoā describe Kawakawa as being used to cure or at least treat the symptoms of aliments associated with inflammation. However, there is no scientific evidence to support these claims.   The two studies which have studied Kawakawa previously observed no anti-bacterial or anti-viral activity by Kawakawa extracts.  Anti-bacterial and anti-viral activity are two mechanisms through which a plant could have the medicinal activity discussed in rongoā.

This study sought to explore the disparity between the traditional uses of Kawakawa in rongoā and the scientific evidence of Kawakawa’s medicinal activity, through examining the effect of Kawakawa on inflammation.  Inflammation is one of the body’s first responses to injury on infection.  However, before these tests could be conducted the material in the Kawakawa leaf needed to be extracted from the leaf into a liquid form.  Two extracts were used, an aqueous extract that was analogous to making a tea and represented traditional Māori methods of preparing Kawakawa and an extraction method using organic solvents.  The aqueous extraction method that was developed fused both the traditional Māori knowledge and knowledge in the literature on the extraction of bioactive compounds from plants.  These extracts were first tested to ensure they weren’t cytotoxic.  The anti-inflammatory testing was then conducted.  Three key markers of inflammation were measured in this study to provide insight into whether Kawakawa has anti-inflammatory properties.  These three markers were nitric oxide (NO), the inflammatory cytokines tumour necrosis factor alpha (TNF-α) and Interleukin 6 (Il-6).  A reduction in any of these markers would indicate that the extract had anti-inflammatory properties.

It was shown that:

These results show that Kawakawa has anti-inflammatory activity.

Notably, it would appear that the extracts have the ability to affect the complex intra-cellular mechanisms in different ways.  This is why the extracts affect the two cytokines differently.  Furthermore, it would seem apparent that the aqueous extraction method, similar to traditional extraction methodology, extracted different compounds from the leaf than the chloroform-methanol-water methanol/water extract.

The traditional uses of Kawakawa identified by Māori in rongoā are supported scientifically by the anti-inflammatory activity observed in this study.  This anti-inflammatory activity was observed through a dose dependant reduction in NO production, Il-6 production and TNF-α production when an aqueous extract was used.   This work would indicate that the traditional uses of Kawakawa have a scientific basis and that further research into the medicinal actions of Kawakawa is warranted.