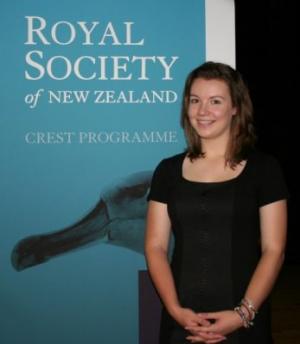 Brittany has been awarded a Gold CREST for her project:

The aim of this project was to investigate whether an increase of whey protein in the diet of female adolescents improves their endurance, agility, and leg power in set physical tests. Thirty-five females, 14-17 years of age, participated in the double-blind trial over a nine week period, consuming either a protein or  control  smoothie three times each  week.  They also completed fortnightly physical tests to determine the improvement of certain components of fitness. These tests consisted of: the Cooper’s 12 Minute Endurance Test, the Illinois Agility Test, and the Horizontal Long Jump Leg Power Test. The drinks each contained the same amounts of water (200g), milk powder (17g), cocoa powder (8g) and caster sugar (12g). The only variable between the two drinks was the addition of 36g of Whey Protein Concentrate to the protein enriched smoothie.

The investigation showed that there was no significant difference (p<0.05) between the Protein and Control Groups for the assessments of endurance, agility and leg power. The null hypothesis that the ingestion of 36g of Whey Protein Concentrate, three times a week for nine weeks will have no effect on the athletic ability of female adolescents is supported by the statistical analysis particular to this research was accepted. In this study there was wide variation between participants for their test results.

Current research suggests that there is a need for increased protein in the diet of adolescent females, however there is a lack of previous research in this area. The demographic in this research study anecdotally indicated that they are becoming concerned about their diet; especially protein consumption. It is essential that they receive correct, accurate and current information.

It may be possible to determine the relationship between increased dietary protein intake and physical performance with a revised research plan. Future research in this area should involve a minimum trial period of 12 weeks to better allow for great physiological adaptations. In addition, the protein-enriched food source should be given as a meal replacement and distributed more frequently throughout a given week. Base-line and on-going accurate information on diet and exercise regimes is also essential in order to attribute any changes in physical performance solely to the increase dietary protein of the trial participants