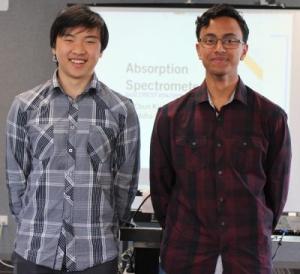 Chun Kiet and Siddha have been awarded a Team Gold CREST for their project:

The absorption spectrometer is a device used to determine the type and concentration of chemical substances and solutions.  Absorption spectrometers are used in many different situations such as measuring element compositions of gases, concentration of specified chemical compounds, or conducting respiratory gas analysis in hospitals. Advancements in technology over the last 10 – 15 years have downscaled both the size and cost of electronic devices and components. High quality light filters once restricted to expensive lab equipment, can now be found in smart phone cameras and web cameras, while high powered LEDs have become easily accessible in local electronics stores.

The development of the absorption spectrometer was based on the creation of 3 prototypes where each advanced and iterated the design to meet the final specifications;

Prototype 1 was designed to measure the absorbance of Potassium Permanganate using green light. This prototype was not focused on accuracy but rather a proof of concept, and was designed to prove that Beer Lambert’s law would be obeyed when an absorption spectrometer was stripped back to its bare essential components of a light source, and detector. From testing, the practical limitations of Beer Lambert’s law were determined and used to reconsider the overall design.

Prototype 2 was designed improve on prototype 1 by increasing accuracy. This was done through three developments within the prototype. Firstly the components had there placement and alignment changed to allow for the maximum amount of light to enter the sensor. This however led to the problem where the sensor was receiving too much light and could not take reliable readings. This led to the exposure of the setting being adjusted so that the sensor would no longer become oversaturated with light. The final change to improve accuracy was to reduce the effect of background light that was not passing through the solution and into the sensor by adding a tube to absorb or reflect uncollimated light back into the solution.

Testing showed that the prototype obeyed Beer Lambert’s Law at concentrations below 0.00067 molL-1 and measured a molar extinction coefficient of 1369.4, which was within 33% of data from a commercial absorption spectrometer. The addition of simple components to improve on accuracy also allowed for the project to remain within its budgeting constraints.

Prototype 3 iterated on prototype 2 in an attempt to further improve accuracy, by modifying the way that light was transferred to the solution with fibre optics. The tube was replicated with a common place fibre optic cable used for remote controlled cars and theoretically would function just as the tube would to reflect the uncollimated light from the LED at the solution. However testing showed that the device was made more sensitive to human and random error due to the collimated light being too intense for the sensor, which caused inaccurate results in comparison to prototype 2.

Prototype 2 proved to be the most accurate of the prototypes as it was the closest to the results shown in previous research. Prototype 2 was built from a 520nm LED as a light source, a black paper lined tube to restrict light, and a Microsoft LifeCam Cinema Web Camera as a detector. This simplified version of an absorption spectrometer provided data that while did not meet the specifications outlined regarding accuracy because it was too inaccurate, it did however improve on previous prototypes greatly and met the other specifications regarding affordability and robustness.