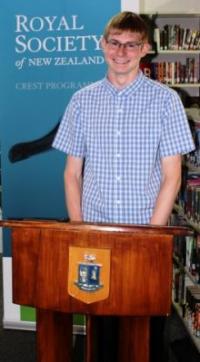 Kyle Robertson was awarded Gold CREST for his project:

Dairy farming in New Zealand has expanded and intensified significantly over the past decade.  Public attention has been drawn to the quality of waterways due to the resultant increased nitrogen inputs to soil.  For example, concentrated nitrogen from cow urine is converted to a mobile form (nitrate) in soil.  Nitrate’s mobility makes it susceptible to leaching into groundwater and waterways.  If high concentrations of nitrate enter waterways, this can encourage algal growth and even cause eutrophication.  Increased cattle stocking rates can also increase soil trampling, which compacts soil and affects the flow of water and solutes, such as nitrate, potentially affecting how much nitrate is leached from soil.

The aim of this project was to evaluate the effect of compaction, caused by cow trampling, on nitrate leaching.  Two soil types were used for the experiment:  Manawatu fine sandy loam (MFSL), which is a coarse textured soil, and Tokomaru silt loam (TSL), which is a fine textured soil.  Soil cores (10 cm deep and 10.4 cm in diameter) were collected in PVC pipes.  These soil testing systems were used to test the collected soil cores and cores were compacted using a hydraulic pump, mimicking an average dairy cow’s hoof pressure.  The experiments were carried out in two stages:

*As nitrate is naturally present in soil, background nitrate could interfere with experimental results.  Bromide was therefore used to mimic nitrate as it is not typically found in soil and has similar properties to nitrate.

Compaction significantly increased bulk density, significantly decreased total porosity, macroporosity and conductivity, but significantly increased bromide leaching from both soils types (P ≤ 0.05).  A possible explanation for the increase in bromide leaching could be that the destruction of the macropores reduced connections with the micropores.  Consequently, there would be less opportunity for bromide to disperse into the soil matrix and so compacted cores would have leached more bromide than non-compacted cores.

These results suggest that sandy soils are particularly vulnerable to leaching bromide (nitrate) and that soil compaction increases the risk of nitrate leaching from both coarse-textured sand and fine-textured silt soils.  Based on the results of this experiment, (i) minimising the risk of soil compaction by reducing stocking rates, (ii) grazing cows predominantly on silt soils rather than sandy soils and (iii) removing cows from soils that are wet could significantly reduce the risk of nitrate leaching from dairy farms into groundwater and waterways.

Future work should include:

Investigating the effect of soil moisture on soil compaction and nitrate leaching.

[2] Total porosity: the ratio of the total volume of pores to the total soil volume (McLaren & Cameron, 2012).