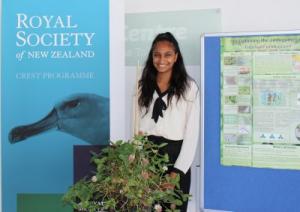 Minushika Punchihewa  has been awarded a Gold CREST for her project:

“Deciphering the ambiguities of Trifolium ambiguum”

Trifolium ambiguum is a species of clover originally from the Black Sea region of Eurasia, but now grown for pasture and hay throughout Australasia, the Americas and Europe. The major feature of T. ambiguum is its complex root system with rhizomes and strong nodal roots, which confer drought tolerance. T. ambiguum has potential for New Zealand agriculture as a pasture species and as a donor of root and other qualities in interspecific hybridization breeding programmes with white clover (T. repens). One of the drawbacks of using T. ambiguum in breeding programmes is that it exists as a polyploid series (with diploid, tetraploid and hexaploid forms). When diploid and hexaploid genotypes are cross-pollinated with tetraploid white clover, sterile and partially fertile triploid and pentaploid hybrids are produced. Due to their low fertility, triploid and pentaploid hybrids are less useful in plant breeding programmes. It is therefore very important that scientists know the ploidy of T. ambiguum plants being used in breeding programmes. Ambiguum ploidies need to be confirmed before cross-pollination is carried out. Currently ploidy level is determined by time-consuming chromosome spreads or expensive flow cytometry. The aim of this project is to identify a number of morphological traits that the plant breeder can use quickly and inexpensively to predict whether a plant is diploid, tetraploid or hexaploid.

The SEEDS Database was searched for accessions of T. ambiguum. Seed of eight T. ambiguum commercial cultivars including diploids, Summit and Forest, tetraploid, Treeline, and hexaploids, Endura, Kura1, Monaro, Prairie and Rhizo were obtained from the Margot Forde Germplasm Centre in Palmerston North, as well as 13 wild ecotypes whose ploidy were unknown. Twenty plants of each cultivar were grown. During the various stages of plant growth, several seed, leaflet, leaf marking and floral characteristics were measured. The eight commercial cultivars with their known ploidy were used as controls and were used to establish statistical models for each of the morphological characteristics to predict the ploidy of unknown ecotypes.

Seed measurements were collected for seed colour, hundred seed weight (HSW) and seed width and length. Accessions would be classified by comparing seed colour blindly to avoid a bias. In the experimental part of the work, 20-Seed Weights (20SW) were measured and used to calculate HSW and seeds per gram. Seed dimensions were measured using a dissecting microscope.

Leaflet measurements include, petiole length and leaf dimensions which were recorded over a two day period in May and September 2013. For each plant, the tallest leaf, with the longest petiole was identified by eye, and the length of the petiole was measured, from the point where it branched from the stem to the base of the three leaflets. The central leaflet of this leaf was then identified and leaf width and length were measured.

Statistical analysis showed valid correlations between ploidy in T. ambiguum and HSW, seed width and length, red fleck, and banner petal length. Thirteen T. ambiguum wild ecotype accessions (from the Caucasus, Turkey, Armenia and Georgia) were grown at the same time and under the same conditions as the cultivar plants. Regression equations were generated from correlations and statistical analyses were then used to predict the ploidy of the wild ecotype accessions.

The seed data measurements were analysed using a variety of multivariate techniques which allowed two-dimensional visualisation of all three measurements on the same graph. MANOVA (Multivariate Analysis of Variance) found significant differences (p < 0.001) between diploid, tetraploid and hexaploid cultivar accessions. Canonical Discriminant Analysis (CDA) were carried out to distinguish between ploidy groups and the Linear Discriminant Coefficients (LDA) were calculated and used to predict the ploidy of the wild unknown ecotypes. Results for seed measurements indicated that there is an overall correlation with ploidy. HSW and seed width showed a linear correlation (R2 >0.5). However the correlation was weaker for seed length. Multivariate data analysis revealed that HSW was the most reliable trait from this study to distinguish ploidy.

The same analysis was carried out on leaflet dimensions, but showed statistically weak correlation with ploidy.

Chi-squared tests were carried out to test the validity of predictions for leaf markings. White V mark was not a suitable characteristic to determine ploidy as there was no clear distinction between diploid, tetraploid and hexaploid cultivars. Red fleck however was only expressed in hexaploid cultivars, therefore it is likely that if a population expressed this leafmark, it is likely to have a genotype of 6x (hexaploid).

Regression analysis showed that the calyx lengths in the floral organ measurements, were not useful as there was no statistical relationship with ploidy (R2<0.5). Banner petal measurements did however show a correlation with ploidy, with a R2 value of 0.646 and a p value (<0.001)

In conclusion, three major traits (seed size, red fleck and banner petal size) were identified as being useful for differentiating diploid, tetraploid and hexaploid plants. The results of this research are significant to plant breeders and scientists as ploidy can be estimated quickly in the field or glasshouse. The traits observed cover different stages of the plant life cycle so T. ambiguum ploidy can be determined in the seed, during plant growth and flowering. Plant breeders could preferentially select particular seeds, cull unwanted plants at the seedling stage, or select individual plants during pollination. This could save a significant amount of time, resources and money. Flow cytometry can further strengthen the models by confirming the predictions of the unknown ecotypes.