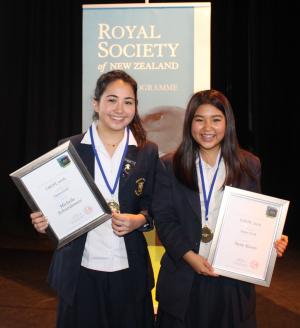 Michelle Schneideman and Susie Kwon were awarded Team Gold CREST for their project:

Cars emit a range of pollutants including Carbon Monoxide (CO). This is a carcinogenic colourless and odourless gas found in car fumes. As a result, CO is undetectable to human senses. Thus, people are unaware when they are in high CO concentration areas like indoor car parks. The poisonous gas can have long and short term effects on the human body depending on the level of exposure. Both long term averages and short term peaks of CO concentrations can affect people’s health.

Indoor car parks have potential for high CO levels due to confined areas and poor ventilation. Pollutants are unable to disperse, especially during hours where the rate of cars leaving the car park is high. Thus, during evening rush hour periods there is potential that CO concentration in the car park is higher due to mass exodus and large number of cold starts of cars. The queues at the ticket machine for people wanting to pay for their ticket would also be longer, hence the average duration of a car park user’s time in the car park increases.

This investigation was carried out because there are few studies in New Zealand regarding the effects of car park users’ behaviour on their CO exposure. This study was conducted to find ways to help the general public decrease their daily CO intake, as individuals are able to minimise their intake of pollutants through small changes in behaviour.

The aim of this study is to investigate how the actions of an individual in a closed car park can affect the carbon monoxide levels they are exposed to. This experiment focuses on answering the following questions:

This study looked at how variables (ventilation options inside the car park, ventilation options outside the car park, the level the car was parked on) can alter the level of CO humans will intake when entering and exiting a car park by car. By having windows opened, this gives the car more ventilation and air will be moving in and out easily. However, these effects will vary between inside and outside the car park. Having windows closed traps any current air (good or bad) sealed tightly in the car, with very little new air coming in and very little air going out. Conversely having windows open allows a free flow air into the car from the environment it is currently in.

One car park, and two cars were used to carry out tests for this experiment, and each trial was carried out across 3 different levels of the car park 3 times.

The first experiment that was carried out focused on the difference in CO levels in car parks with car windows opened and windows closed. Following the same routes when exiting the car park at level 1, then level 3, then level 5 by using Langans (Carbon Monoxide detecting device) to measure the CO levels in each car.

The results from the Inside Ventilation Settings Experiment concluded, on average, passengers with their windows closed are exposed to lower levels of CO inside the car park, which ranged from 5.3 ppm (level 5) to 9.3 ppm (level 1), compared to CO levels that passengers were exposed to with their windows opened, which ranged from 9.4 ppm (level 5) to 14.0 ppm (level 1). However, placing the data side by side, windows opened showed many peaks, up to 66.7 ppm, and dips while windows closed remained on average at a constant level of 5.0 ppm.

Statistical analysis (T­test) proves that the differences were statistically significant at 95% confidence because the p value for both tests were under 0.05.

Since CO is also an indicator of other pollutants, if CO levels are high, there is potential that the concentrations of other harmful pollutants, such as nitrogen oxide, particulate matter, and hydrocarbons, are also high. These chemicals have the potential to trigger acute health episodes such as asthma attacks and heart attacks, or are carcinogenic.

In conclusion, it is recommended that car park users close all windows when in a car park until exiting. After they have exited the car park, it is advised that they open their windows,for a two minute period, so that the car can be well ventilated of polluted air. For most car park users exposure to high levels of CO for a short period of time will not have a short term effect on their health, but it is possible these high levels of CO exposure could lead to long term effects on their body. CO is used as a proxy for other harmful chemicals found in car fumes. Any changes in behaviour that can be made to reduce exposures in high exposure environments can help to minimise cumulative exposures and reduce adverse health consequences.