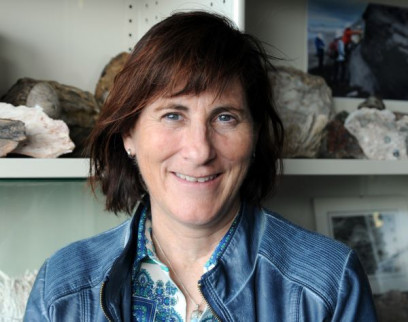 Professor Kathleen Campbell FRSNZ is a paleoecologist, geologist and astrobiologist at The University of Auckland, evaluating the interactions of organisms and their environments, especially macroinvertebrates, trace fossils and extremophile microbes. She studied Earth Sciences at the University of California (Santa Cruz; BSc, Hons in the Major), University of Washington (MSc), and University of Southern California (PhD), followed by a post-doctoral appointment (U.S. National Research Council) in the Exobiology Branch of NASA Ames Research Center, California. She joined The University of Auckland in 1997. Kathleen is the inaugural Director of Te Ao Mārama – Centre for Fundamental Inquiry, Faculty of Science, a research centre of diverse academics and students in Science, Arts and Engineering who are examining the origin and evolution of the Universe and its life. She heads the Astrobiology research group in Earth Sciences, which collaborates with scientists from around the world and supports student research projects on extreme environments, past and present. The group investigates the interactions of geofluids with the Earth’s crust and its life, to aid in a better understanding of the migration and concentration of mineral and geothermal resources, gas hydrates and hydrocarbon seeps, and the settings for early life on Earth and possibly Mars. She was awarded the Hochstetter Lecturer by the Geoscience Society of New Zealand in 2009 and delivered the Burbidge Dinner Lecture to the Auckland Astronomical Society in 2011. In 2014 she explored the interactions of hydrothermal fluids and early life as an invited senior research fellow (LE STUDIUM Institute for Advanced Studies) in residence at the Centre National de la Recherche Scientifique, France. Kathleen’s scientific team was a finalist in NASA’s Mars 2020 rover site selection. With colleagues from Australia, France, Argentina and the U.S.A., she has been conducting scientific drilling in the Pilbara region, Western Australia, to obtain pristine samples of the oldest life on land in ~3.5 billion year old hot spring deposits.