The Shapeshifting Crown: Locating the State in Postcolonial New Zealand, Australia, Canada and the UK

Cris Shore with The Shapeshifting Crown

Marsden Fund contract UOA1335 'The Crown: perspectives on a contested symbol and its constitutional significance in New Zealand and the Commonwealth' 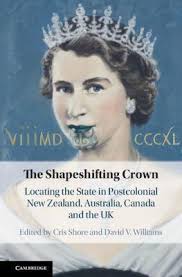 The Crown stands at the heart of the New Zealand, British, Australian and Canadian constitutions as the ultimate source of legal authority and embodiment of state power. A familiar icon of the Westminster model of government, it is also an enigma. Even constitutional experts struggle to define its attributes and boundaries: who or what is the Crown and how is it embodied? Is it the Queen, the state, the government, a corporation sole or aggregate, a relic of feudal England, a metaphor, or a mask for the operation of executive power? How are its powers exercised? How have the Crowns of different Commonwealth countries developed? The Shapeshifting Crown combines legal and anthropological perspectives to provide novel insights into the Crown’s changing nature and its multiple, ambiguous and contradictory meanings. It sheds new light onto the development of the state in postcolonial societies and constitutional monarchy as a cultural system.