Home What we do Our funds and opportunities Marsden Fund Celebrating Marsden research Book Gallery Turing’s Legacy: Developments from Turing’s Ideas in Logic

School of Mathematics and Statistics, Victoria University of Wellington 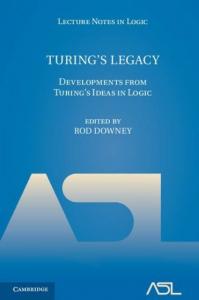 Alan Turing was an inspirational figure who is now recognised as a genius of modern mathematics. In addition to leading the Allied forces' code-breaking effort at Bletchley Park in World War II, he proposed the theoretical foundations of modern computing and anticipated developments in areas from information theory to computer chess. His ideas have been extraordinarily influential in modern mathematics and this book traces such developments by bringing together essays by leading experts in logic, artificial intelligence, computability theory and related areas. Together, they give insight into this fascinating man, the development of modern logic, and the history of ideas. The articles within cover a diverse selection of topics, such as the development of formal proof, differing views on the Church-Turing thesis, the development of combinatorial group theory, and Turing's work on randomness which foresaw the ideas of algorithmic randomness that would emerge many years later.