Adrienne first became involved with Royal Society Te Apārangi's Talented School Students programme in 1999. This is Adrienne's ABC of science and describes the pathway of her science journey. Now a scientist at Contact Energy and in her free time a speedway fanatic!

A is for Astronomy

Even as far back as primary school I discovered that I enjoyed finding out what made the universe work and realised that I was good at and enjoyed science. I often got into strife with my teachers for selecting reference books at the library instead of novels. Like any child interested in space, I wanted to be an astronaut. My interest in astronomy continued into high school where my relationship with the Society began. I applied and was selected to attend the Australian International Space School in 1999, together with 30 other space-crazed individuals from New Zealand and Australia. This was a great experience for me and we spent the whole week participating in space-based activities. We visited the Tidbinbilla Deep Space Tracking Centre and the Mt Stromlo Observatory where one of the oldest telescopes in the southern hemisphere is housed.

When I left high school I had been accepted into both a Bachelor of Primary School Teaching and a Bachelor of Science programme at Waikato University.  After much consideration I began the teaching degree, but after my second year I decided that teaching was not the career path that I wanted to follow. I did still however (and still do) enjoy working with children and wanted to take the opportunity to introduce them to the world of STEM.  It is amazing to see the excitement in a three year old's eyes or even an adult when you help them perform a simple vinegar and baking soda reaction.

After a gap year, I began a Diploma of Technology, specialising in science, at Wintec.  The main reason I chose this programme of study was that it was more focused on practical skills needed for technicians, I didn’t (and still don’t) want to become desk bound! The only time this option looks slightly attractive is when I have to carry out field work in the pouring rain!

While a technician’s role within the science sector (and other STEM areas) can at times be under appreciated, I would encourage anyone who enjoys being more hands on to fully investigate this option for a career.

B is for Biology

My science working life began at NIWA’s Hamilton campus and it was here I satisfied the work experience component of my studies.  While at NIWA I worked within the biology, fish and toxicology department’s laboratories, doing the jobs that make up typical student work. This included identifying and measuring thousands of juvenile migratory Galaxiidae spp. fish (whitebait), and to this day I can still vividly remember the smell of the preserving fluid.

My first ‘real’ science job was working in a dairy microbiology laboratory, where my days were spent conducting activities involving a number of different microbiology tests.  The main perk at this lab was that we were attached to the sensory lab and it was amazing how many people needed to visit the lab on ice cream taste-testing days. Snow Freeze anyone?

After the dairy lab I moved to Taupo District Council’s water quality laboratory, where I was part of a team that monitored various types of water in relation to the Council’s resource consents.

C is for (geo) Chemistry

For a number of years I have worked for Contact Energy’s Geothermal Resources Department, based at the Wairakei Power Station. I am part of a team that develop, monitor, and sustain Contact's Geothermal Reservoirs.  At times this can be quite a challenge for my colleagues and myself, due to the unique nature and the small size of the geothermal industry. We can encounter problems that no one else in the world has ever seen previously.

My role at Contact Energy is a mixture of both field and desk work.  On any particular day I could be out in the field conducting an output test on a 20MW well. During this type of test, a geothermal well is discharged to the atmosphere via surface test equipment designed to measure the well's physical properties, mostly how much electricity it could potentially generate. The sensory overload (noise, smell, vibration and sight) encountered during these tests is very difficult to describe, but provides you with a healthy respect of what isn’t overly far beneath your feet.  The next day I could be back at the office working on data for reports and the day after I could be back out in the field monitoring a natural geothermal feature after hacking my way through blackberry bushes taller than I am.  This variety of work is one of the best aspects of my job.

When I do manage to escape from work there are a multitude of activities that take up my time, however they do boil down to four:

Sport - I am generally keen on giving anything a go, but mostly during summer I can be found at the speedway tracks around the country crewing for my sister. 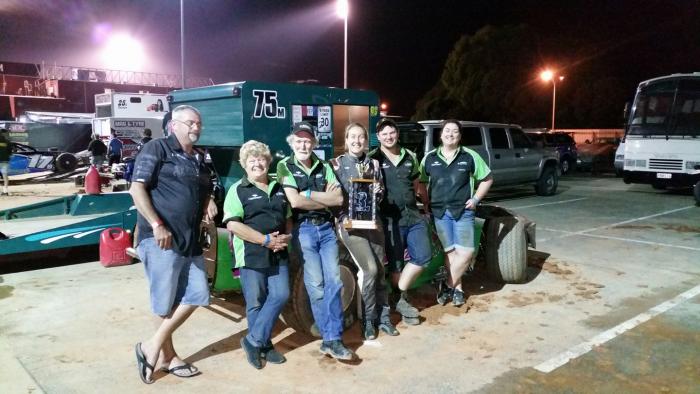 Travel – I typically take a trip to one of my bucket list destinations every two to three years, but the list of places I want to go to keeps growing.  The next trip (I think) will either be to Scandinavia to see the Northern lights or back to Central America.

Astronomy – I own a 200mm reflector telescope but unfortunately I do not get to use this as much as I would like to these days.

Reading - I am a self-confessed book worm who, when the mood strikes, can demolish a novel in one sitting.

D is for Down the line

My science journey so far has, if nothing else, proven to me that you don’t always know what is around the corner.  Who knows what the letter E may stand for!