Emily's love of physics has taken her across the world to work alongside world renowned physicists.

For as long as I can remember I have been interested in science and its applications. While attending Auckland Diocesan School for Girls' I was fortunate enough to complete a Gold CREST project. This led to my selection to Realise the Dream in 2005 where I spent a week with other like-minded students and participated in lots of different science experiences. The Talented School Students Travel Award managed by Royal Society Te Apārangi also supported me to attend the International Future Problem Solving Competition in the United States of America and the International Chemistry Olympiad in Budapest. 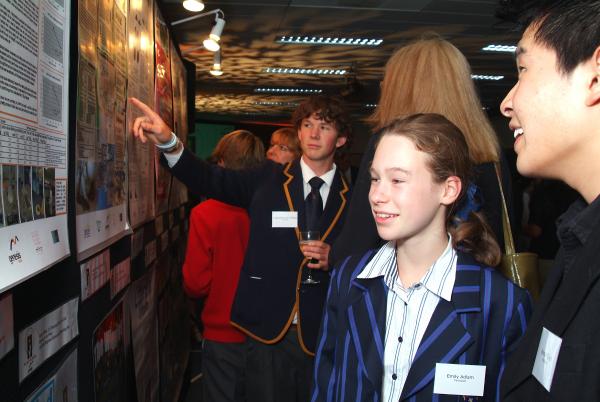 Emily showcasing her work at Realise the Dream in 2005

Studying both Physics and Philosophy are really fascinating, because there are so many unresolved conceptual issues in modern physics and this combination of subjects provides you with the tools to explore them. I particularly enjoyed the courses in the philosophy of quantum mechanics, and in my final year I wrote my Masters’ thesis on The Problem of Confirmation in the Everett Interpretation, essentially exploring why I believe the many-worlds interpretation of quantum mechanics to be fatally flawed. This thesis (jointly) won an award for 'Best Final Honour School Philosophy Thesis' at Oxford and a condensed version was subsequently published in the British Journal for Philosophy of Science. 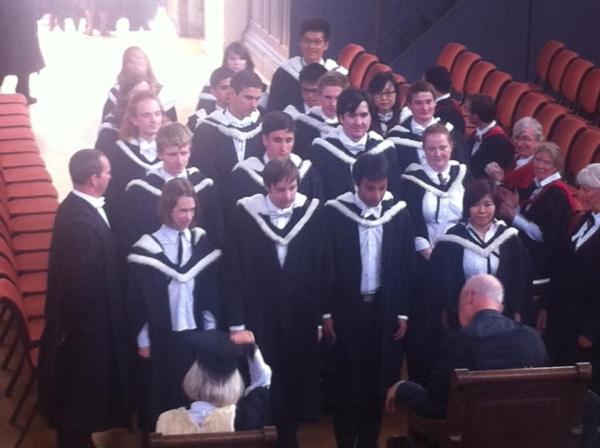 Emily first on the left front row gaining her Masters at Oxford.

While at Oxford University, I was also highly involved with the Physics Society, becoming its Secretary and then President. This was a really fun job as it meant I got to select and personally meet all the physicists who we invited to speak to the Society.

I then spent a year at the Perimeter Institute for Theoretical Physics doing a second Masters degree as part of the Perimeter Scholars International programme. This was a very intense course, because the aim was to give an overview of all the important research areas in modern theoretical physics, which is a lot of material to cover in one year! However, it was great fun doing it together with a small group of young people who had a passion for physics similar to my own. I was also excited to have the chance to work on my thesis under the supervision of Dr Rob Spekkens, a physicist whose work I had always greatly admired.

In 2014 I began my PhD in Quantum Information at the University of Cambridge, under the supervision of Professor Adrian Kent. My work at Cambridge focused on relativistic quantum information and cryptography: we developed a novel quantum effect that we refer to as a ‘Quantum Paradox of Choice’ and invented two new protocols for a cryptographic task known as 'bit commitment'. We published four papers in various journals as a result of this work.

During my time at Cambridge I also had the chance to attend a number of great conferences, including the Global Young Scientists Symposium in Singapore, the FXQi annual conference in Banff, and a wonderful meeting called Rethinking Foundations of Physics, where a group of young physicists were sent to a cabin in the Austrian Alps for a week to think and talk intensively about physics. 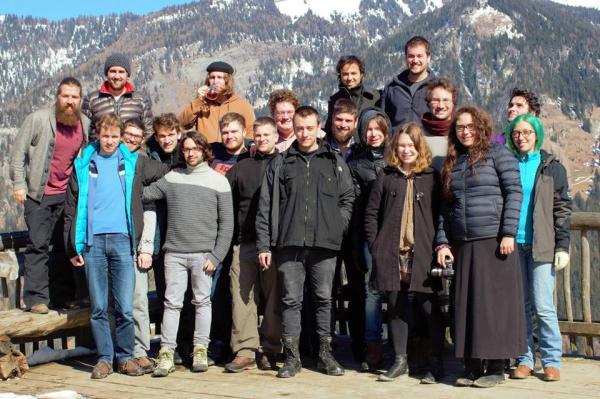 Emily is third from the right in the front row. Spending time in the Alps with other physicists

I have recently submitted my PhD thesis and am looking forward to graduating soon! I’m very grateful to Royal Society Te Apārangi for their support and encouragement during my schooling; it is in no small part due to this sort of mentorship and funding that I was inspired to pursue the area of study which I find so endlessly absorbing.

In my spare time I still love to play the violin and enjoy writing poetry.