Nathan Kenny reckons that being a scientist is the best job on Earth. Find out more about his journey from being selected by the Society for an international science event in 2001 while still at school to researching sea sponges in 2017 at the Natural History Museum in London.

As a research scientist, I reckon I have one of the best jobs on Earth. I get to learn new things for a living, and I still can’t quite believe that I am allowed to spend my time investigating the specific questions that I find interesting. I work at the Natural History Museum, London, and the work done here has been useful for addressing diverse political, scientific and economic problems over the years.

I am very grateful to Royal Society Te Apārangi in not only helping to communicate this work more widely, but also in giving me my first taste of real science many years ago.

My journey into my current post was pretty significantly shaped by the support of the Society. In my last few years of secondary school I toyed with a variety of potential career paths. Medicine in particular seemed like an easy option, with a clear career progression that was easy to understand. While I loved all areas of science and was curious as to how I could go into it as a profession, I had little real understanding of what ‘being a scientist’ actually entailed, while being a doctor or a lawyer seemed like an obvious choice.

With the Society's support I was able to attend a number of scientific summer schools – the Professor Harry Messel International Science School in Sydney, and also the Genesis Science School (now the Rotary National Science and Technology Forum) in Auckland, both of which gave me a real understanding of what life as a researcher could be like. Seeing a bit of real research in action, and talking to the Professors, post docs and PhD students who helped run the activities made the possibility of research science as a vocation seem like a real (and enticing) option. However, I still struggled to decide what exactly to study at university but after those experiences, I knew for sure that I wanted a career in science, and tried my best to make this so.

Like most scientists, I have jumped through a variety of institutions during my training. I started at the University of Otago, and studied Genetics and Philosophy at undergraduate level. I spent some time in Heidelberg as well, on exchange, with the initial idea of studying for a PhD in Germany. However, life did not work out that way, and I ended up doing my doctorate in Zoology at Oxford University, studying the development of worms and limpets, and specifically how they set up the left and right hand sides of their bodies. I then headed over to Hong Kong, where I was a “post doctoral fellow” (essentially a short term researcher, training in new skills while looking for a lecturing/professorial job) at the Chinese University (a complete change of scenery) studying arthropod hormonal evolution in animals such as shrimp, millipedes and horseshoe crabs.

These questions may sound a bit esoteric at first glance, but worms and limpets use the same genes to set up their bodies as we do, but we can see them in action a lot more clearly in those species. Medical advances in humans can therefore be aided by studying such “model species”. Similarly, the arthropod hormone work I did is crucial for allowing us to design and use pesticides effectively – most modern pesticides target these arthropod hormones, interfering with insect growth. To avoid targeting “good” species, while protecting our crops from “bad” species, we need a good understanding of how their hormonal systems work.

I still work as a post doc, now in London. I am working with sponges, and in particular with how they cope with varying climates – by comparing species from the freezing Antarctic and the tropics, I am trying to work out the way that changes have occurred at the genetic and cellular level of these organisms to allow them to live in the environments that they call home. This work is supported by the European Union Horizon 2020 program, and using this information, hopefully we will not only be able to see how sponges have evolved to live in very challenging environments, but also predict how they and their ecosystems will cope with warming sea temperatures and climate change.

If a scientist tells you that their career has gone entirely according to plan, be very, very sceptical. A significant part of science seems to be hearing “no” – no to grant applications, no to attempts to publish, and even resounding “no”s from your attempts at cool experiments when they (often) fail. However, a lot can be learnt from these failed attempts, and sometimes new opportunities will open up just as you are recovering from what seemed like a crushing blow. I only got the funding for my present position after applying to a number of fellowship programs, and I am lucky to have had a supportive institution and great supervisors to advise and help me.

A big part of my job is telling others how interesting and important this kind of work is, and I don’t always get the chance to show other people what we do. Institutions such as Royal Society Te Apārangi have been vital in both showing me a route into my chosen field, and allowing me to share our exciting findings more widely – hopefully this encourages other people to go into science too! Or at least to talk to scientists more often – we will happily chat for hours about our work if you let us! 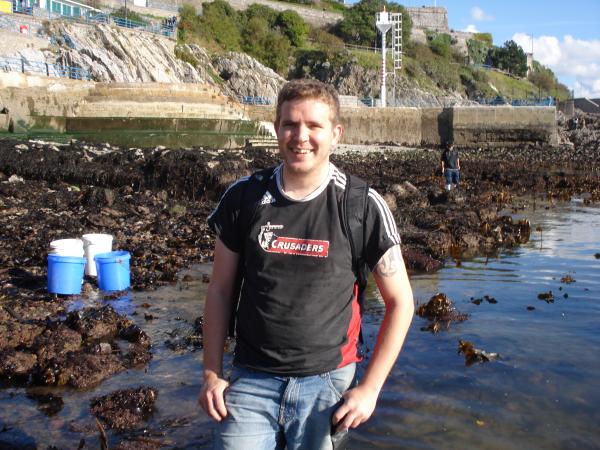 This opportunity to talk to scientists is why I am a keen advocate for summer schools like Hands on Science and the Rotary Science Forum, as it exposes students to the sides of scientific enquiry that never get taught at school. Even better, it lets students see what scientists are actually like. Science, for all of its dry reputation, is an innately human activity. In science you can make firm friends and have a lot of fun with your work, and summer schools communicate this very well. I enjoyed my time at summer schools so much that I actually ended up working at the Hands on Science summer programme. I made some life-long friends (and useful professional contacts) with my co-workers, and it has been wonderful to see some of the students I saw as course attendants also make their way into tertiary education and beyond! Science has also allowed me to indulge some of my hobbies, such as travel and learning, in a way that is pretty unique – not many professions allow you to do that sort of thing!

I should also mention the downsides of science. Unfortunately, funding and the prevalence of short term contracts is always a problem, no matter which field you are in, and even the best scientists struggle to access grant money. Perseverance, and no small amount of luck, is a necessary part of modern day science, and the modern political climate is not always supportive of young scientists. Despite too many years at university and several temporary research posts, I still have a considerable amount of work ahead of me before I will be able to get a permanent position, and that is entirely normal for this career.

However, it is not all doom and gloom. I would not trade my career path for any other – I love what I do. New Zealand has also launched a range of funding schemes that could make it possible for me and other young scientists to return home with our ideas and apply them to solving the problems that face New Zealand and the world as a whole. Things could always improve, and advocacy by institutions such as the Society, and by scientists themselves, is crucially important in telling others just how important science is, and what it can achieve.

I am very grateful to Royal Society Te Apārangi for exposing me to the ‘real world’ of science way back in 2001, and stimulating my interest all those years ago. Without that, I never would have been exposed to the challenging and exciting career path which I am now on – and I hope that the experiences I had continue to be available for generations to come.