Rutherford Medal winner, geologist Professor Colin Wilson, on 'The Life and Times of Supervolcanoes'.
These free public talks are bought to you by Royal Society Te Apārangi in partnership with GNS Science, EQC and Victoria University of Wellington.

Professor Colin Wilson spoke to Wallace Chapman on RNZ National's Sunday Morning on Sunday 5 August 2018 about his fascination with supervolcanoes. He had just finished the South Island part of his tour and was about to start with the North Island. 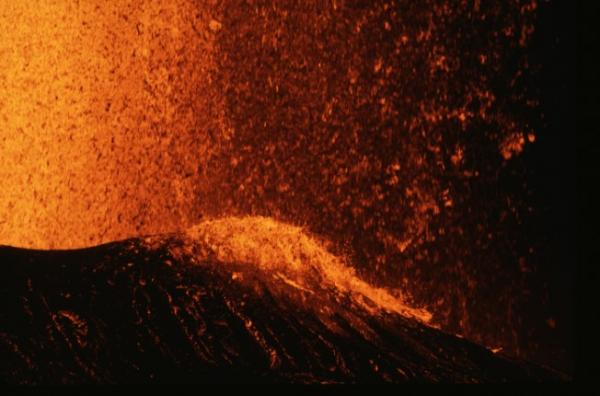 Royal Society Te Apārangi is aflame with excitement to present the 2018 New Zealand Rutherford Lecture with Professor Colin Wilson FRS FRSNZ from the School of Geography, Environment and Earth Sciences at Victoria University of Wellington.

Colin was awarded the Rutherford Medal at last year's New Zealand Research Honours for his research into understanding large, explosive supervolcanoes and the hazards they pose. The Rutherford Medal is the Society's highest award, instituted at the request of the Government to recognise eminent research or technological practice by a person in any field of science, mathematics, social science, or technology. 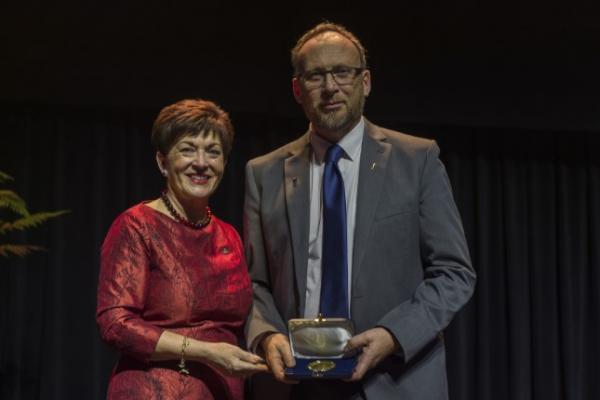 An outstanding field-focused geologist, Professor Wilson was elected a Fellow at The Royal Society (London) in 2015, a group that consists of seven other New Zealand scientists including Sir Peter Gluckman, the inaugural Chief Science Advisor to the New Zealand Prime Minister, and most recently, Distinguished Professor Margaret Brimble.

Colin, who is British born but based his career in New Zealand, says there are several things that fascinate him about volcanoes: "the finding of new things that have not been recognised before; the challenge of trying to work out what has gone on in past eruptions (where if the eruption were to be repeated, you would not survive); as well as the enjoyment of being able to work on things from the very large scale in the field down to the microscopic scale in the laboratory".

Emeritus Professor Richard Bedford, President of Royal Society Te Apārangi says, "The Rutherford Lecture is the Society's most prestigious public address given by a very distinguished researcher that is offered in several centres every year. This year Professor Wilson will be visiting 22 centres to deliver his lecture, an unprecedented tour by a winner of this medal. I would urge members of the public interested in volcanoes to attend this lecture".

Chief Executive of Royal Society Te Apārangi, Dr Andrew Cleland states "The Society is grateful that through several partners recognising the national importance of Professor Wilson’s work, we are able to bring his expertise to many more parts of Aotearoa than would otherwise be possible. We thank GNS Science, EQC (the Earthquake Commission) and Victoria University of Wellington for recognising the value of improving public understanding of volcanoes and their significance for our nation".

Being on the south-western edge of the 'Pacific Ring of Fire', a zone related to the tectonic movements of the Pacific Plate and which includes more than 75% of the world's volcanoes, New Zealand has had, probably since its infancy, active volcanism. Active and dormant volcanoes, associated geothermal areas and volcanic remnants are visible throughout our landscape, however, in recent times, eruptions have only been in the Taupō Volcanic Zone and the Kermadec Arc (since Mount Taranaki's last activity in 1854). Strikingly though, New Zealand is where the world's most violent volcanic eruption happened within the last 5000 years (known as the Taupō Eruption, or sometimes referred to as the Hatepe Eruption). 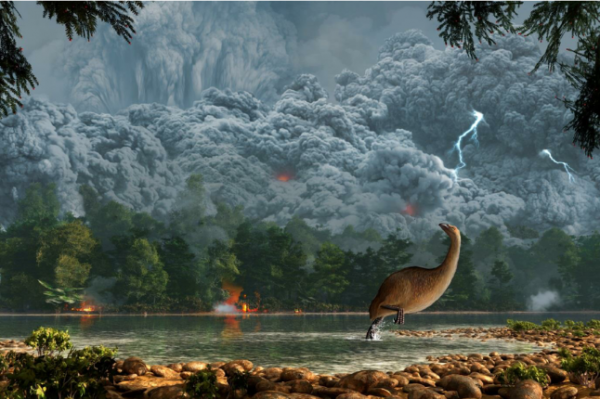 Impression of catastrophic final phase of Taupō Eruption c. AD 232. From 'A Dramatic Landscape', the first chapter of 'The Drama of Conservation - The History of Pureora Forest, New Zealand' by Professors David Lowe and Carolyn King, edited by C.M. King, D.J. Gaukrodger, N.A. Ritchie, and published by Springer, Berlin, and the NZ Department of Conservation. (c) Mark Garlick.

With Hawaii's famously active young volcano Kīlauea explosively erupting this month, is New Zealand in a position to forecast our next eruption? Colin cautions that volcanic systems are difficult to predict because the use of the term 'prediction' implies that volcanoes have a pattern of behaviour that is uniform.

"Contrary to this, many volcanoes show behaviour that is better described as chaotic, and not amenable to prediction. There are good reasons for supposing, however, that volcano forecasting may become feasible for many more volcanoes in the future but, as with the weather, forecasts can only be made on good information and even then can be wrong. Volcanoes have so many factors that control their behaviour that simple prediction is not likely for most future eruptions."

In light of our risk from volcanoes, Colin recommends that Kiwis should: "be prepared, in the same way that they should be prepared for earthquakes. There are steps that can be taken to minimise the damage from eruptions, and these have been learned both from New Zealand experience (such as in the 1995-1996 Ruapehu eruptions) and overseas".

He cheekily adds that "What would help is having several relatively small eruptions to keep the volcanoes in the mind's eye of the general population and politicians".

These events are free to attend and you are welcome to turn up on the day, however, due to their expected popularity, please register to guarantee your seat(s) by following the above booking links.

Presented in partnership with GNS Science, EQC and Victoria University of Wellington.