Today New Zealand and Australia are launching an ambitious plan to describe our undiscovered, undocumented and unnamed biodiversity before it becomes extinct. Best estimates put this undiscovered proportion of our biodiversity at 70%.

The plan is being launched at Parliament House in Canberra today to invigorate and boost this vital work.

He endorses the call for greater support for the scientists who study and name biodiversity.

“Taxonomists and biosystematists build the system, the species and their relationships, on which much of biology, conservation, ecology—and nature documentaries—depend. We cannot properly grasp or understand the natural world without this taxonomic system. Every time I show the world a species and its life, I depend on the work of these scientists.

“And yet, in countries the world over, at the very time that many species are under greatest threat, funding and other resources allocated to the task of discovering, naming and documenting nature are declining.

“This decadal plan provides an important vision, and outlines what taxonomists and biosystematists working in Australia and New Zealand could achieve if properly supported.” 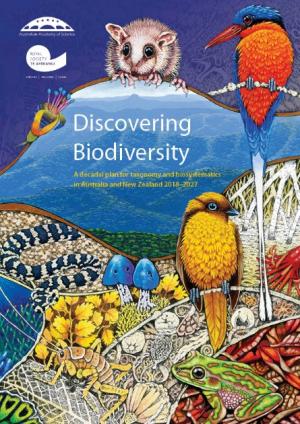 The 10-year plan is a joint project of Royal Society Te Apārangi and the Australian Academy of Science. It was developed by an expert advisory committee and working group of scientists from both countries, led by Australian plant taxonomist, Dr Kevin Thiele.

He says with careful planning and adequate capacity building, we could completely document our biodiversity in a generation.

“A substantial increase in the current rate is possible if taxonomists and biosystematists are properly supported to take advantage of the technological revolution underway, in areas such as genomics, machine learning and 3D imaging, which would help speed up the mapping of our unique biodiversity,” says Dr Thiele.

“We have access to a remarkable number of globally unique and unusual plants, animals and organisms and many elements are in place that will allow Australian and New Zealand taxonomists and biosystematists to lead the world. The plan launched today furthers this vision by supporting, enhancing and expanding taxonomy and biosystematics, highlighting their role in science and in society more broadly.”

Professor Wendy Nelson, from NIWA and the University of Auckland, who chaired that review and is on the advisory committee for the new Australasian plan, is hopeful for the changes the plan will bring.

“Following New Zealand’s 2015 report, we are making progress in New Zealand for maintaining and building capacity in taxonomy.

“Since the release of the review, it has been pleasing to see a greater acknowledgement of the importance of taxonomy in our national science strategies and government work programmes.

“Furthermore, last year saw the establishment of a national working group hosted by Te Papa that brings together 13 institutions that hold over 90% of New Zealand’s taxonomic collections. This is a very important step in safeguarding our biological collections, which underpin the work needed to describe new species.”

Dean Peterson, Head of Science at Te Papa, chairs the National Systematics and Taxonomic Collections Working Group, which is supported by Chief Executives of CRIs, museums and universities that care for biological collections.

“This group provides national coordination and strategic advice for the care of biological collections, research on them and making the information widely available for end users.”

Dr Tom Trnski, Head of Natural Sciences at Auckland War Memorial Museum, is also on the advisory committee for the decadal plan and contributed to the 2015 New Zealand review. He says “taxonomy and naming of species is the foundation supporting all biological sciences, and in fact for management of species for conservation or extractive industries such as fishing and farming”.

“Over the last three decades the support for biological collections and the research undertaken on them has declined significantly, reducing the resilience of New Zealand to deal with biosecurity risks and develop an understanding of the unique character of our biological assets.

“The Decadal Plan recommends the establishment of a funded body that will support the discovery of new species in New Zealand and disseminate this new knowledge. This would reverse the erosion of taxonomic knowledge available in New Zealand, and provide career pathways for young taxonomists.

“This new plan with Australia will hopefully enable us to develop key missing infrastructure, encourage the use of new and emerging technologies, and allow our dynamic science to serve the needs of society, government and our unique biodiversity.”

View the plan at royalsociety.org.nz/taxonomy