Tens of thousands of catfish were netted in Lake Rotoiti in 2018. Catfish pose a serious risk to New Zealand lakes, so the local community and researchers are banding together to control numbers and prevent the fish spreading to other waterways.

To be a 'Catfish' is a pop culture expression for someone who pretends to be somebody else, coined from the massively popular MTV show Catfish that exposes identity theft within online relationships. These online 'Catfish' might be an infamous scourge of dating apps, but their fishy namesakes are swiftly becoming a scourge within Aotearoa's freshwater systems, and threaten to overwhelm native species such as koura (freshwater crayfish) and are preying on fish eggs, small fish and juvenile trout. 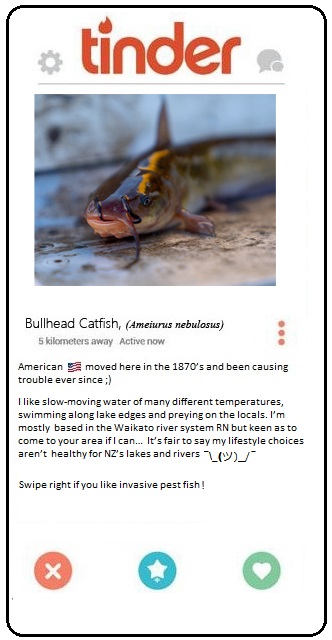 Catfish were introduced into New Zealand in the late 1800s. They are not good eating and are relatively easy to catch and therefore not particularly attractive as a sporting fish. As such the historical reasoning for the introduction of the species to our waters remains unclear, but catfish have now established themselves in several places around New Zealand.

Local communities, councils and researchers in significantly affected regions like the Waikato are developing innovative new ways to control the catfish population, and are working hard to spread public awareness about the catfish threat.

David Bach, a primary school teacher from St Mary’s School in Rotorua and a keen angler, says concerns have been mounting about the fish in the Waikato region since the 1980s.

In 2018 David joined the Science Teaching Leadership Programme, an initiative administered by Royal Society Te Apārangi that for the first phase places participant teachers with a host organisation that uses science as a significant part of their work. Through this experience the teachers develop links between schools and scientists, and are able to enhance their school’s science programmes to better engage students.

David was hosted by Te Arawa Lakes Trust, the organisation that manages Te Arawa’s settlement assets including 14 Rotorua lake beds on behalf of the iwi. Some of the projects David was involved with included the containment and surveillance of the pest catfish invasion of Lake Rotoiti.

The leadership course and knowledge of science capabilities from the Science Teaching Leadership Programme, along with David's placement with the Te Arawa Lakes Trust, have given him the tools to begin planning citizen science projects with his students at St Mary's that will help them contribute to controlling the catfish invasion in their local environment.

The Bay of Plenty Regional Council is playing a significant role in the response to the catfish incursion in Lake Rotoiti and have invested over $300,000 of their biosecurity budget alongside countless hours of labour to combat the issue.

“Catfish are opportunistic predators that consume a variety of species including native fish, trout as well as trout eggs. They are also a serious threat to one of our taonga species, koura,” says Shane Grayling, BOP Regional Council Biosecurity Team Leader.

“And if killing off native species and trout wasn’t enough, they also lower water quality by churning up sediment on the bottom when feeding.”

Current methods the council are using to control the catfish population include fyke netting. Fyke nets are a type of cylindrical fish trap which contain a series of funnel-shaped opening which make it easy for fish to enter the trap but difficult for them to get out.  These traps have netted over 48,000 catfish so far, though netting is quite labour intensive and they must be regularly checked to ensure that native fish are not caught in them. Other methods include using cordons and some other methods developed by an ongoing science programme with NIWA and the University of Waikato.

The University of Waikato is working to develop eDNA testing to better identify the presence of catfish, which will help to pinpoint locations of the fish faster and more effectively than netting. An acoustic tagging programme has also been set up to track catfish movements around Lake Rotoiti which will show seasonal movements and help the BOP Regional Council to be better informed when targeting the fish. 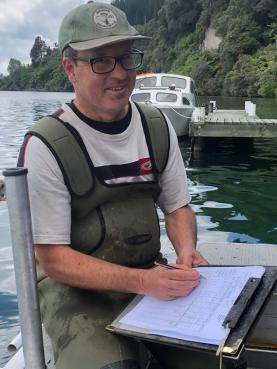 David says that a culture change is required from everyday lake users to help stop the spread of catfish to other areas. An awareness campaign is being spearheaded by the BOP Regional Council to further educate boaties to ‘check, clean and dry’ whenever they move any of their aquatic gear (including boat trailers, fishing or recreational sports gear) from one waterway to another. This is particularly important as catfish are able to survive up to 24 hours out of water, so catfish hitchhiking on boat trailers, eeling nets or other recreational water equipment is a huge cause for concern among boaties and lake users when moving equipment.

New innovations and research to help control this invasive species are continuously being explored and developed, and input is proving vital from all spheres of the community from scientists and regional councils to volunteers and citizen science projects.

The Bay of Plenty Regional Council, Te Arawa Lakes Trust, David and others in the community who are driving the control and mitigation of the pest issue need others in the public to ensure they do their bit in stopping the spread between waterways.

Another participant teacher who has embarked on Phase One of the Science Teaching Leadership Programme in 2019, Andrew Doyle, from Rotorua's Lynmore Primary will carry the catfish torch as he has also been placed with Te Arawa Lakes Trust as his host organisation. Andrew will be able to contribute to mitigating catfish pest control and bring knowledge back to his school in Phase Two, just as David has done with his pupils at St Mary's.