For her memoir 'Driving to Treblinka: A long search for a lost father' (Awa Press), Diana Wichtel received the Royal Society Te Apārangi Award for General Non-Fiction at the 2018 Ockham New Zealand Book Awards this week. 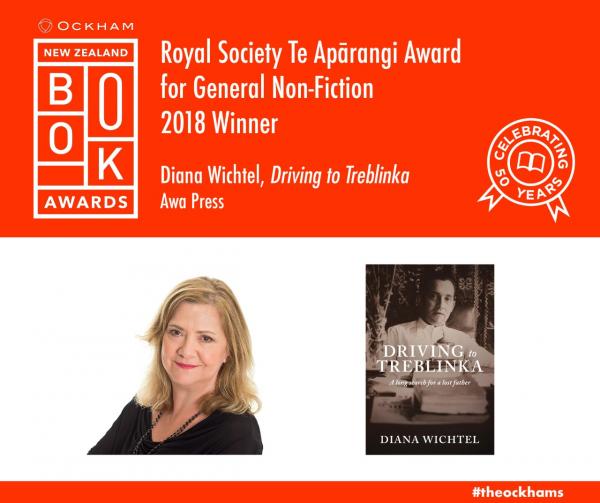 Driving to Treblinka is about Diana's search to discover what happened to her father, a Polish Jew, who survived the Holocaust by using his wits, but then disappeared when Diana moved with her mother and siblings from Vancouver to New Zealand.

The judges in this category, Dr Ella Henry, Philip King and Toby Manhire, commented that “Wichtel’s curiosity, alternately upsetting and uplifting, turns invisibly into a kind of mission. At its heart this is a family story, but one which cannot but shine a light on the vestiges of anti-Semitism that linger in Europe today. It is not just a beautifully written book, but an important book, too.”

The other short-listed finalists in this category, who all gave readings from their books, were Michael Belgrave with Dancing with the King: The Rise and Fall of the King Country, 1864-1885; Anne Salmond with Tears of Rangi: Experiments Across Worlds; and Tom Scott with Drawn Out: A Seriously Funny Memoir.

The three other main award winners were:

And gold was very much in fashion on the night, with the theme being 'Gold' as the New Zealand Book Awards celebrated its 50th anniversary.