During this year’s Conservation Week DOC have released a video narrated by Sir David Attenborough, alongside a virtual tour of the critically endangered kākāpō’s home on New Zealand’s rarely-visited Whenua Hou and Anchor Islands.

Kākāpō are one of Aotearoa’s most unique species, and have won over fans all over the world with their endearing, pudgy features and waddling gait. The heaviest parrot in the world, males can top out at a whopping 2.2kg and the birds can pile on an entire kilogram of fat prior to the breeding season.

Kākāpō are avid solo hikers who can travel long distances with their sturdy legs and, though flightless, they are excellent climbers and are known to scale 20m up their favourite rimu trees. They are the only parrots in the world (and the only New Zealand bird) to lek-breed and are also thought to be the longest lived birds on the planet with an estimated lifespan of 90 years! 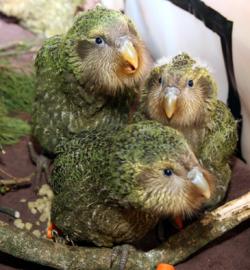 Some notable admirers of the nocturnal oddities include prominent figures like Sir David Attenborough, Benedict Cumberbatch and Stephen Fry. However, with just 148 kākāpō alive today and their habitat restricted to remote predator-free islands, not many people ever get the chance to interact with these quirky animals.

In an effort to share the world of the kākāpō with a wider audience the Department of Conservation teamed up with Google and Ngāi Tahu to create 360-degree panoramic views of the kākāpō and their habitat.

Sir David Attenborough has lent his famous voice to DOC for a video about the kākāpō and their protected island habitats to view alongside the imagery and details about kākāpō conservation efforts in Google Earth’s new stories feature, Voyager.

Dr Andrew Digby, Kākāpō Science Advisor from DOC says it is fantastic to be able to share the world of kākāpō with such a wide audience.

"Google provides a way for everyone to experience kākāpō, the special places in which they live, and some of the work that we do to protect them.

"We’ve been working on this project for a long time, so it’s great to see this come to fruition. We’re grateful to Google for making this happen, and particularly to Sir David Attenborough for his support.”

Google New Zealand’s Matt Jenke says the rugged conditions on the islands made the capture one of the most challenging ever conducted in the country. The team used helicopters and a beach landing via light aircraft to reach the islands.

“Crawling through dense bush with an 18kg camera on your back isn’t easy. Kākāpō are also extremely good at camouflage; often we’d search for an hour or so only to look down and find one sitting just meters away.

“The payoff is significant, we hope the images raise awareness of the work being done to protect the kākāpō, a taonga of Ngāi Tahu and much loved by New Zealanders and fans all over the world,” Matt says.

You can help the kākāpo conservation effort through DOC's Kākāpo Recovery by volunteering, buying a beanie, cash donations or the 'adopt a kākāpo' programme.