Home News Jumping spiders can count 1, 2, and many

Jumping spiders can count 1, 2, and many

Portia, a jumping spider, targets other spiders as its preferred prey and it has a variety of predatory strategies up its sleeve to avoid getting eaten in the process

Like other jumping spiders, Portia has legendary eyesight but it leads the pack when it comes to having intricate vision-guided behaviour. Besides having the capacity to make plans, act on the basis of object permanence, represent specific goals and solve novel problems, Portia often has to confront more than one other spider at the same time.

Portia’s capacity to represent exact numbers of prey has now featured in a new article in the Royal Society’s journal Interface Focus by Fiona Cross and Robert Jackson from the University of Canterbury and the International Centre of Insect Physiology and Ecology. Experiments were based on showing Portia a specific number of prey (ranging between 1–6) that could only be accessed by walking along a detour path that first went directly away from the prey.

These experiments were also based on using expectancy-violation methods, which is unconventional in studies on spiders and other arthropods, but conventional in many studies on the numerical aptitudes of primates, including human infants. During experiments, Portia’s view of the prey was obstructed during part of the detour and, during this time, the number of prey in the scene was changed, or it was kept the same in control trials. This meant that when Portia could again view the prey, the number might or might not be the same as what had been seen before. Evidence of expectancy violation was observed when Portia hesitated before continuing to move towards the prey. 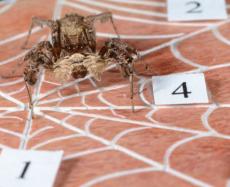 A change of number between 3 vs. 4 prey or 3 vs. 6 prey did not result in expectancy violation, but expectancy violation was observed for every other change in number. This was observed independently of whether the larger number was seen first or second, and independently of prey size and orientation. The results of this study can be characterized as Portia counting 1, 2, and many, which is similar to what has been observed with human infants.

July 2017 Update: You can also read an interview with Fiona Cross and Robert Jackson on the Royal Society website, where they talk about their results.