Attempting to break down the wall of resistant worms in livestock has won Seer Ikurior from Massey University the chance to compete at the Falling Walls Lab final in Berlin in November.

Seer was selected from 45 applicants from New Zealand and Pacific, 20 of which were chosen to pitch their ideas at the Falling Walls Lab New Zealand event held by Royal Society Te Apārangi this week, with support from the German Embassy in Wellington.

Calling himself the “Worm Detective”, based on his admiration for fictional detectives as a child, Seer set out to see if he could tell whether lambs were suffering from worms by observing their behaviour in the field. Worms present a major health issue for sheep farming and all lambs are routinely treated with anti-worm treatments whether they are infected or not. Unfortunately, this is causing an increase in the numbers of worms resistant to treatment, just as the overuse of antibiotics is increasing the numbers of antibiotic-resistant bacteria. 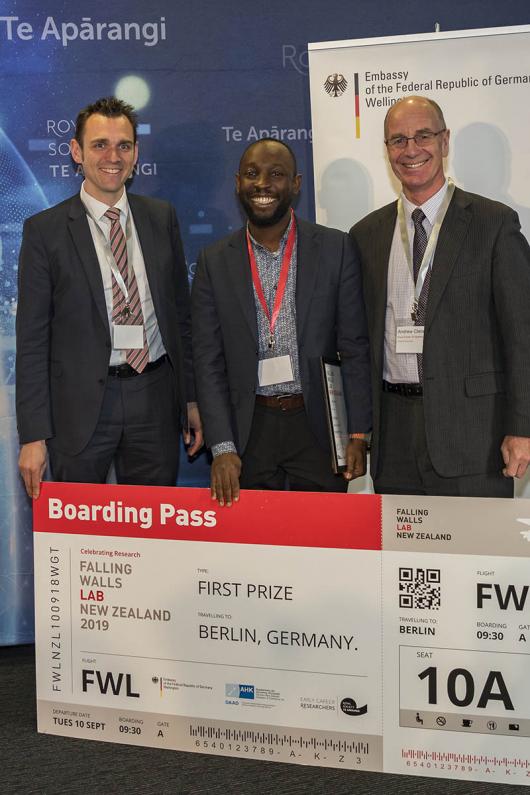 In his 3-minute presentation, Seer explained that—like us—worms pass on successful recipes to the next generation, only their recipes are for being resistant to worm treatment! After many hours observing lambs, Seer found measurable differences in resting and grazing time between infected and non-infected lambs, making it possible to identify and treat just those lambs showing ‘wormy behaviour’. He is now using ear-tag accelerometers and GPS monitoring devices to track grazing and movement as a marker for the level of parasitism. While his research to date has been on lambs, it is likely the approach could apply to other ruminant animals, including cows.

Seer is a PhD student at Massey University. He holds a Masters degree in Veterinary Public Health from the University of Glasgow and is a Nigerian-trained Veterinarian. Passionate about science communication, last year he won the Future Leader Award in the 180 Seconds of Discovery video competition held by the Royal Society Te Apārangi’s Early Career Researchers Forum with his video: Wormy Lambs: Using Sensing Technologies to Make Targeted Treatments.

Second place in the Falling Walls Lab New Zealand competition went to Jake Campbell, a PhD candidate at the University of Canterbury, who is attempting to break the wall of unaffordable diabetes management by creating an optical sensor that can be worn on a finger. The device will measure blood oxygen and glucose levels without needing to take blood.  He is developing this device using open source principles and is passionate about creating new methods of medical sensing which are minimally invasive, accurate and low cost to ensure all people can afford the best healthcare. 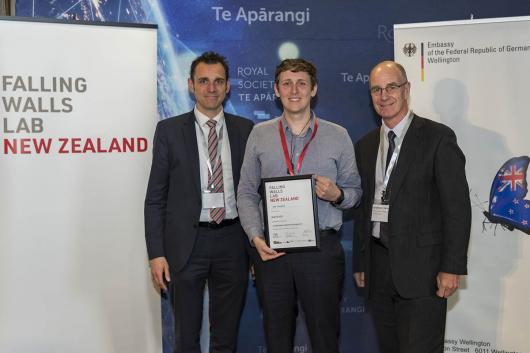 Jake Campbell, University of Canterbury, won second place for his research to break down the wall of unaffordable diabetes management.

Third place in the competition went to Dr Catherine Tsai, an early career researcher in the field of molecular microbiology and infectious diseases at the University of Auckland. Her project is to develop a novel strategy for vaccine delivery. Most vaccines today are injected so need to be administered by a skilled professional, contain what is known as an ‘adjuvant’ to increase the immune response, which can raise toxicity concerns, and must be maintained at a certain temperature during transport. Catherine aims to overcome these limitations by modifying the surface of food grade bacteria to contain the ‘antigen’ to trigger immunity. The bacteria causes an immune response without needing an additional adjuvant and the vaccine could be taken orally or via a nasal spray. It could also be freeze dried and transported at ambient temperatures. Such a vaccine would be much better suited to worldwide use, thus helping to break the wall of infectious diseases by increasing vaccination rates. 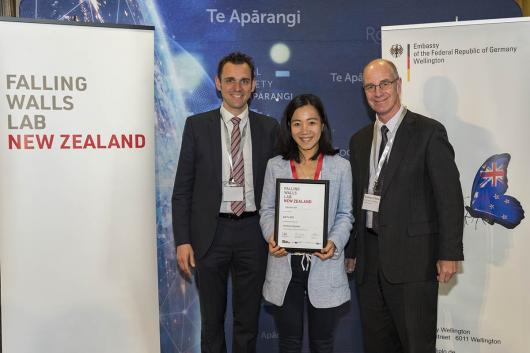 Dr Catherine Tsai, University of Auckland, received 3rd place for her research attempting to break the wall of infectious diseases through improved vaccines.

Some of the other novel solutions the audience heard about included optimising radiation doses and drug repurposing to treat brain cancer, decreasing drag on moving vehicles and how to improve e-government and reduce the digital divide in the Pacific Islands.

The global event is run by The Falling Walls Foundation, a non-profit organisation in Berlin, dedicated to the support of science and the humanities. It was established in 2009, 20 years after the fall of the Berlin Wall. At its heart is the question ‘Which are the next walls to fall?’ as a result of scientific, technological, economic and sociological breakthroughs. This year will mark 30 years since the wall came down.

Dr Timo Bauer-Savage, Deputy Head of Mission for the Embassy of the Federal Republic of Germany, said that the Falling Walls competition was about promoting new ideas and building interdisciplinary networks between today’s emerging researchers and innovators.

He said that collaborating with Royal Society Te Apārangi to host Falling Walls Lab New Zealand was a continuation of the strong tradition of scientific collaboration and exchange between the two countries.

She offered a warm welcome to all participants, particularly the two participants who had travelled over from Fiji to take part and represent the Pacific Island Forum Nations in the competition.

She thanked the jury for sharing their time and expertise and also acknowledged the additional support for the event received from the Royal Society Te Apārangi Early Career Researcher Forum and the German–New Zealand Chamber of Commerce.