Two new book reviews of the 150th celebratory special issues, 'Finding New Zealand’s Scientific Heritage' of the Journal of the Royal Society of New Zealand have been published in CSIRO's ‘Historical Records of Australian Science’.

Last year as part of Royal Society Te Apārangi’s 150th celebrations after having been established as the New Zealand Institute in 1867, two special issues of the Journal of the Royal Society of New Zealand (JRSNZ) were released. Two book reviews of the special issues have been published in the latest issue of Historical Records of Australian Science (HRAS).

HRAS is the leading history of science journal in the Australasian region and records the history of pure and applied science in Australia, New Zealand and the southwest Pacific. The book reviews were compiled by Dr Peter Hobbins of the University of Sydney, the Book Reviews Editor of Historical Records of Australian Science. 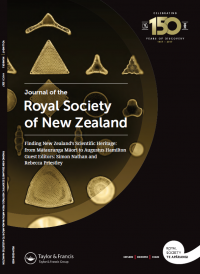 The special issues – both edited by Rebecca Priestly CRSNZ and Simon Nathan, explore New Zealand’s wider scientific history with the first special issue: Finding New Zealand’s Scientific Heritage: From Mātauranga Māori to Augustus Hamilton covering the period up to the start of World War I.

This issue, Vol/Iss 47/1 was reviewed by Dr Thomas A. Darragh at Museum Victoria, who noted the significance of Royal Society Te Apārangi within New Zealand's scientific history and commended the special issue as “an excellent introduction for the reader who wishes to find out more about aspects of New Zealand’s nineteenth-century science.” 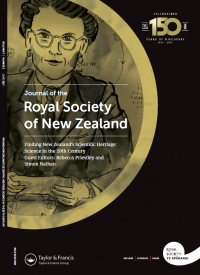 This issue, Vol/Iss 47/2 was reviewed by Dr. Alessandro Antonello at the University of Melbourne, who notes radiophysicist Elizabeth Alexander “whose story is notable not only for her scientific contribution, but also the social and institutional barriers faced by a woman truly advancing her career in the 1940s,” and comments on the 11 short essays and introduction included in the Journal.

The following excerpt is the article published by CSIRO Publishing in Historical Records of Australian Science on 20 July 2018:

The special issues of Journal of the Royal Society of New Zealand are available to read on Taylor and Francis Online: