New Zealand will be the first country outside Europe with an animal research openness agreement, launched today in Queenstown at the Australian and New Zealand Council for the Care of Animals in Research and Teaching (ANZCCART) 2021 conference.

New Zealand has long been committed to maintaining and improving high standards of animal welfare, as well as undertaking world-leading research and teaching using animals, controlled under the Animal Welfare Act 1999. The scientific community in New Zealand recognises the importance of demonstrating and promoting values that contribute to these animal welfare standards.

The objective of the Openness Agreement on Animal Research and Teaching in New Zealand is to ensure that the public are well informed about animal research (including the benefits, harms, and limitations). Topics such as the role animal research plays in the process of scientific discovery, how research is regulated in New Zealand, and what researchers and animal care staff do to promote positive animal welfare should be addressed. Communication should be realistic about the ethical considerations involved (including that of the 3Rs of Replacement, Reduction and Refinement). Research is done that aims to benefit humans, animals, and the environment.

New Zealand’s agreement is modelled on the UK’s 2014 ground-breaking Concordat on openness on animal research led by Understanding Animal Research. Similar agreements followed in Spain, Portugal, Belgium, and France, with the assistance of the European Animal Research Association. The New Zealand Board of ANZCCART gratefully acknowledges the extensive work by these organisations who continue to inform and support progress on these issues in Aotearoa New Zealand and this ANZCCART-led Openness Agreement initiative.

Professor Pat Cragg, Chair of the New Zealand Board of ANZCCART and Acting Deputy Vice-Chancellor (Academic), University of Otago, said: “Public confidence in animal research depends on the scientific community taking part in an on-going conversation about why, and how animals are used. Through signing this openness agreement, the signatory organisations have committed to having this conversation with the public.

“At the time that the UK Concordat was launched, there were mixed responses from New Zealand delegates. Responses ranged from ‘yes we must do this too’ through to ‘let’s be very cautious about this’.

“When I returned to the New Zealand Board as Chair in early 2020 I was delighted to see such an agreement was well underway. Now, seven years on from the Concordat, the NZ Openness Agreement is ready to launch. The working group and the many institutions involved in the consultation phase that have worked tirelessly to bring this agreement to fruition are to be congratulated. Being open about why and how we use animals in research and teaching is just so important,” Professor Cragg said.

Associate Professor Siouxsie Wiles, microbiologist and animal researcher, University of Auckland, said: “I am delighted that Aotearoa New Zealand finally has an Openness Agreement and applaud the many organisations and institutions that have signed up to it. I hope the Agreement will encourage and support researchers and organisations to be more open about their work that involves animals. In doing so, the public will be better informed not just about the incredible research being done in New Zealand for the benefit of both humans and animals, but also about the dedication and care of the many researchers and technical staff involved.”

Dr Jodi Salinsky, Animal Welfare Officer and University Veterinarian, University of Auckland and Chair of the Openness Agreement Working Group, said: “We are thrilled to launch the Openness Agreement in Aotearoa New Zealand. This will help organisations that conduct, fund or support animal research communicate about the crucial work that is being done on the public’s behalf, by dedicated researchers, technicians and animal care staff. The judicious use of animals in research remains vital to scientific, medical, and veterinary progress. There is no better time than the current pandemic to help our community understand the important contribution of this work. We look forward to the day when animals are no longer needed and honour the animals for the advances made that allow treatments, vaccinations, and cures for diseases to be found.” 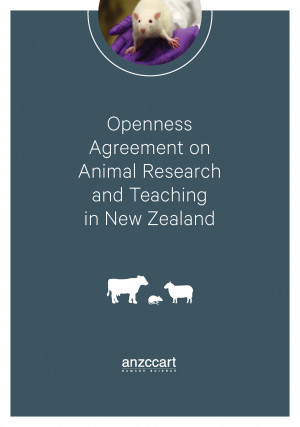 The Openness Agreement on Animal Research and Teaching in New Zealand is published today (27 July 2021), signed by 21 organisations from across the science sector that carry out, fund or support the use of animals in research or teaching.

These 21 signatories have formally agreed to the Openness agreement’s five commitments:

Under each of the commitments are actions that signatories can take to fulfil them, such as identifying spokespeople who will answer questions about an organisation’s use of animals; supporting researchers who would like to talk about their work using animals; including information on the role that animal research has played in announcements of scientific advances, and providing images and videos of the reality of animal research.

The Openness agreement was prepared by a working group representing 13 organisations including universities, peak scientific bodies, crown research institutes, non-profit organisations, and a multi-national bio pharmaceutical company. Reviews were provided by the ANZCCART NZ Board and there was a twelve-week public consultation in early 2021.

Further organisations that carry out, fund, or support animal research in any way are invited to sign the Openness Agreement at any time.

The inaugural signatories are:

ANZCCART is an independent body which was established to provide a focus for consideration of the scientific, ethical and social issues associated with the use of animals in research and teaching in Australia and New Zealand.